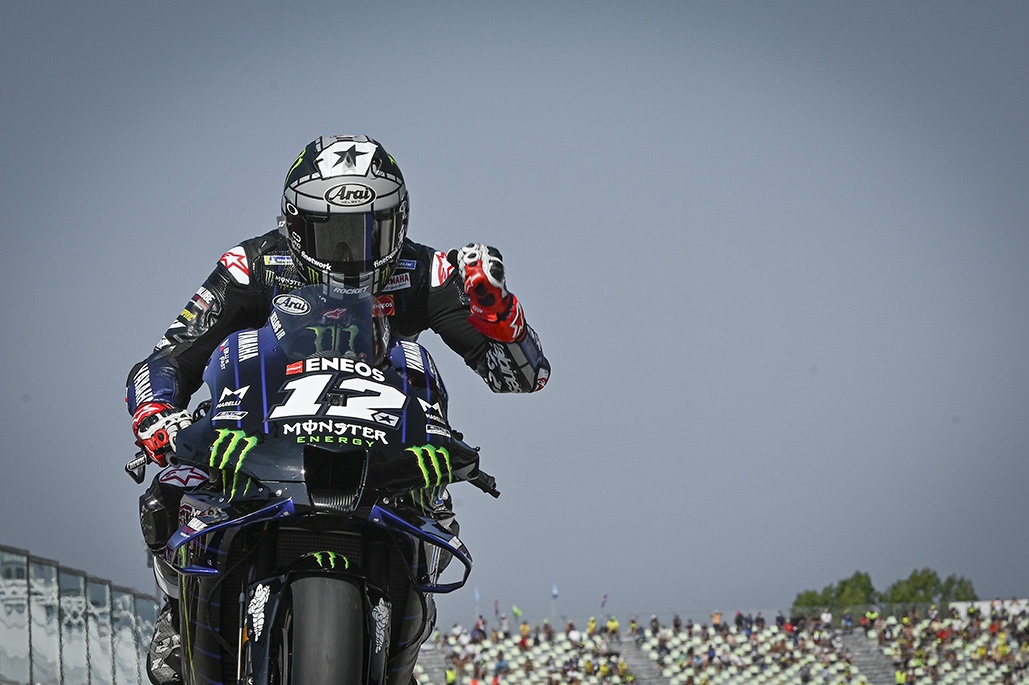 For the first time in the MotoGP™ era, it’s a full house for the Iwata marque as ‘Top Gun’ leads a top four lockout.

Viñales was the first rider to set a flying lap time in the second qualifying session, and a 1:32.130 was a solid opening time… but it was going to be beaten. Alex Rins (Team Suzuki Ecstar) was sat behind Viñales on the first lap but the Spaniard ran on at the end of the back straight, before Q1’s fastest rider Pol Espagraro (Red Bull KTM Factory Racing) crashed at Turn 15. That brought out the yellow flags which saw Quartararo have to sit up and scrap the lap, but the Frenchman was getting the hammer down on his second time around…

Another rider to be getting the hammer down was Free Practice pacesetter Rossi. The Doctor was further down the road from Quartararo and sure enough, the nine-time World Champion went provisional P1 to send the 10,000 Misano fans wild. However, Quartararo would soon demote Rossi to second with a 1:31.791, with the riders then pitting to push some fresh tyres in.

By this time, Viñales had slipped to P5 and was out on his lonesome on his second run. A personal best saw him stay fifth, before a faster lap then came in for the number 12. It was provisional pole, but only just – with the gap a tiny 0.004 as he then pitted again in a two-stop strategy. With the other riders back out for their second runs, Quartararo couldn’t improve his lap time on his first attempt, 0.038 the Frenchman’s deficit, as second fastest in Q1 Miguel Oliveira (Red Bull KTM Tech3) and Andrea Dovizioso (Ducati Team) quickly exchanging P6.

Rossi was then bang on the money but after losing two tenths in Sector 2, the Italian backed out of his lap. Compatriot Morbidelli and his teammate Quartararo were then lighting the timesheets up in the first and second sectors, as Jack Miller (Pramac Racing) slotted himself into P6. Coming round the final sector, Morbidelli placed himself onto a dream provisional home Grand Prix pole position, and Quartararo unable to improve on his last flying lap. Was that it? Not quite…

Viñales was two tenths under Morbidelli’s time as an absolute stunner started coming in from Top Gun. Nailing the final half of the lap to take the chequered flag with a new Misano lap record, and taking that accolade away from Yamaha test rider Jorge Lorenzo, Viñales’ time gave him plenty of clear air ahead of Morbidelli. The Italian is therefore forced to settle for a sterling second on home soil, but it’s his best qualifying result of the season.

Quartararo completes the front row, 0.380 adrift from Viñales. The 21-year-old didn’t sound too disheartened with P3 though, he’s looking strong to challenge for his third win of the season from the outside of the front row. Rossi spearheads Row 2 in P4, and that’s the number 46’s equal best Saturday afternoon result of 2020. Joining Rossi on the second row is Miller who improved on his last lap to get the better of injured teammate Francesco Bagnaia (Pramac Racing), but both Pramac riders had an upbeat qualifying in San Marino.

Rins is the leading Suzuki in P7, the Spaniard beating teammate Joan Mir by 0.012 in Q2 and the latter – like Miller – leaping up the leaderboard on his last lap. Dovizioso, the man second in the Championship, will have to start from P9 but race day is another day – as we’ve seen a good few times from the number 04. Johann Zarco (Esponsorama Racing) completed the top 10, while Pol Espargaro managed to get out on his second bike after his crash and finish less than a tenth ahead of Oliveira – the Q1 graduates ending Q2 in P11 and P12.

Yamaha are back! After two tougher rounds, no one could get within a tenth and a half of the YZR-M1s in qualifying, with polesitter Viñales really laying down the gauntlet ahead of Sunday’s crucial battle. Can anyone stop the Iwata onslaught in San Marino, and if not, who comes out on top in the Yamaha dogfight?!

You know what to do – tune in for the MotoGP™ race at 14:00 local time (GMT+2) to see what twists and turns lie ahead on race day… and in the title fight.

Maverick Viñales: “I felt on the limit! We tried to take the maximum from the bike and for sure we made a good strategy, I saved a lot of tyres in the weekend to use in Q2, and it pays. I feel amazing, anyway I had some good weeks at home, we carry on the good mood and every lap I felt fantastic on the bike. I’m enjoying the weekend a lot and we’ll try to go to the maximum tomorrow too.”