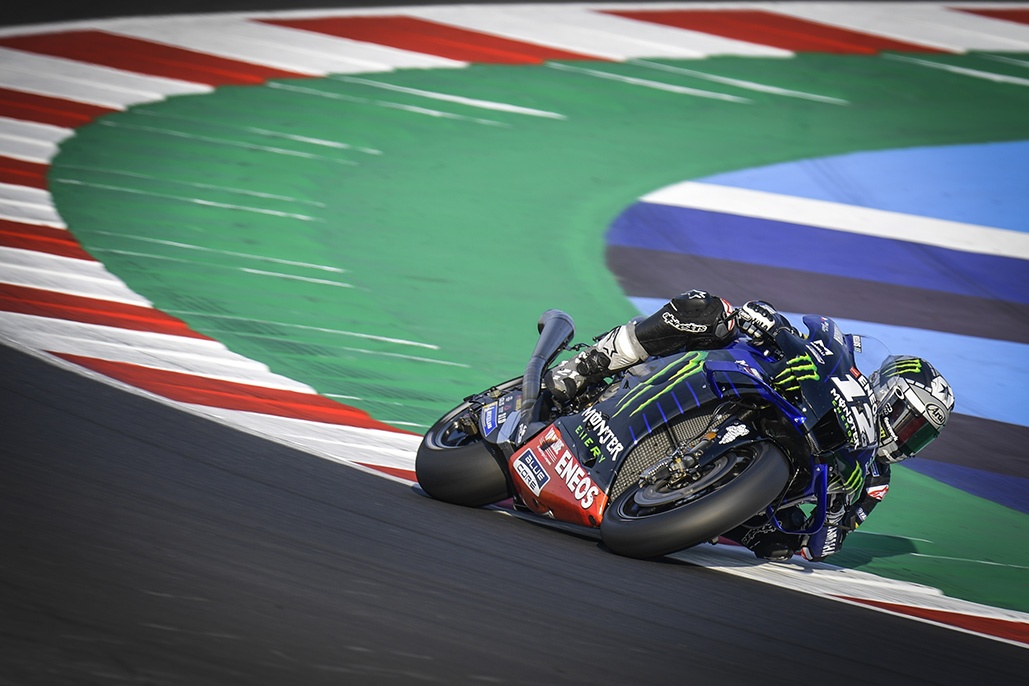 The Spaniard dominated the top of the timesheets, but there were five factories in the top five on Tuesday.

Maverick Viñales (Monster Energy Yamaha MotoGP) topped the Tuesday test at Misano World Circuit Marco Simoncelli, putting in a 1:31.532 to end the day two and a half tenths clear of Takaaki Nakagami (LCR Honda Idemitsu). Johann Zarco (Esponsorama Racing) was third quickest despite still recovering from a broken scaphoid, the fastest Ducati at the test. There was plenty on show, and five factories in the top five!

Viñales was out on track focusing a lot on the medium tyre, which he didn’t use in the race on Sunday when he missed out on the podium from pole. He said he’s intending to use that more during the upcoming Emilia Romagna GP and work more on the graining issues with the medium – already improved – that affected him last weekend. In addition, a new exhaust was out on track from the Iwata marque, and Yamaha also had a new carbon swingarm to try that they’ll probably use at the Emilia Romagna GP. And there’s even more, with a new rear brake system and chassis also on show. Viñales said what he tried on Tuesday didn’t make a huge step forward, but allowed him to ride more relaxed – and that could help him to push more. His teammate Valentino Rossi didn’t push for a fast lap and was 17th of 18 riders on the timesheets, but more can most definitely be expected from the number 46 on Sunday.

Rossi was also the man who debuted the new exhaust, the aim of which, according to Team Manager Massimo Meregalli, is drivability and top-end speed – important for the long straights in Barcelona and Aragon, although for the moment the riders have said there is no big improvement. Fabio Quartararo (Petronas Yamaha SRT) tried the exhaust too and ended the day in ninth, 0.804 off the top as he focused on race pace. His teammate and Misano race winner Franco Morbidelli sat the test out due to a stomach complaint.

Takaaki Nakagami (LCR Honda Idemitsu) was second on the timesheets, seemed happy with a step forward and got to ride the 2020 bike too. That got a positive review, with “no negatives” although he suffered a small crash on it that he put down to hitting a bump. Alex Marquez (Repsol Honda Team) was P11 overall and on test duty for a few things including a new Honda exhaust and aero. The Spaniard explained that he went faster than he did over the weekend on his second run of the day, and that he has managed to find a better feeling over one lap. Cal Crutchlow (LCR Honda Castrol) remained sidelined by injury, and Stefan Bradl (Repsol Honda Team) also sat out the test, not planned to be on track after having already tested at the venue ahead of the GP.

Zarco, in third, appeared pleasantly surprised by his feeling on the bike as he continues his recovery from scaphoid surgery just ahead of the Styrian GP. He was quick, as ever, and top Ducati after a solid fast lap. He suffered a small crash exiting pitlane but nothing too dramatic. The man fresh from a maiden podium, Francesco Bagnaia (Pramac Racing), was seventh despite his ongoing recovery from a broken leg… and that was also the reason he elected to test only in the morning.

Andrea Dovizioso (Ducati Team) was the next man from the Borgo Panigal factory on the timesheets as he ended the day in eighth – and pretty glowing. He also only tested in the morning with “no reason” to continue in the afternoon once the work was done and some solutions found. He was working on the setup and the details, as ever, and praised a new part that had arrived and the increase in confidence he’d been able to achieve on Tuesday. Jack Miller (Pramac Racing) was a little more downbeat but continued work on the first sector and Turn 11, and tried the chassis updates from Ducati. He was P12 overall despite some technical trouble when he’d wanted to use the same time of the day as the race to work on another step forward. Danilo Petrucci (Ducati Team) was in P16 and using Dovizioso as a spotter in the afternoon as he looks for some progress, with Tito Rabat (Esponsorama Racing) in P18 and suffering a technical issue during the test.

At KTM, Pol Espargaro (Red Bull KTM Factory Racing) was the lead man on the timesheets in P4, and explained how his main aim was to improve grip and stability, especially on the rear. The stability through the fast corners had been improved, as has the grip on entry. Espargaro didn’t push for a lap time and was working a lot on race pace.

Three of the four KTM riders were putting in the laps, with Iker Lecuona (Red Bull KTM Tech3) sitting out the action and leaving Espargaro, Lecuona’s teammate Miguel Oliveira and fellow rookie Brad Binder (Red Bull KTM Factory Racing) on track. Red Bull KTM Factory Team Principal Mike Leitner said that they were trying to improve the turning of the RC16, with the riders also appearing with a new white cover over some cables that come out from the tank cover, go around the steering head and back under the tank cover on the other side… Binder ended the day in P10 overall, and Oliveira P13. The Portuguese rider also had a small crash and said he didn’t have many new parts to try, working instead on a more immediate step forward for the Emilia Romagna GP.

Over in the Team Suzuki Ecstar garage, Team Manager Davide Brivio said Joan Mir and Alex Rins tried a different swingarm, although the initial feedback was that it didn’t make much of a difference, so Suzuki won’t be using it – according to Brivio himself. Rins, fifth overall, said he had a positive day though as he tried the swingarm and some electronic settings, and that he was riding comfortably free from pain despite some complaints in the latter laps of the San Marino GP as he continues to fight back to full fitness. Mir said he was happy with his day’s work overall too, which included some setting changes… and not pushing for a lap time. The Spaniard said he and Suzuki tried to improve their qualifying pace, but ended up improving their race pace even more if that’s a good warning shot for many. He was only just off his teammate, in P6 by the end of play.

Aprilia Racing Team Gresini’s Aleix Espargaro and Bradley Smith were testing the holeshot system on the rear, with the intention of trying to use it during the race – just like Ducati – in the near future. Chassis and electronics were also a focus for the Noale factory, with Espargaro trying a setting that gives him more torque, the aim being to give him more pace over a qualifying lap. Smith was happy to set a mid-1:32 and confirmed he was testing a new chassis too, with the Brit putting in a mammoth 96 laps over the course of the two sessions. He was P14 just 0.055 behind Espargaro, who was in turn only 0.006 off Oliveira.

That’s a wrap from testing and we’ll be back on track on Friday to begin the Emilia Romagna GP, before the lights go out for the race on Sunday at 14:00 (GMT +2).