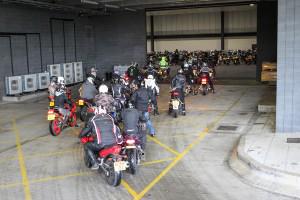 The 2015 Carole Nash MCN London Motorcycle Show drew to a close today, marking the end of the best event in the show’s history. Thousands of motorcycle fans flocked to London’s ExCeL Centre to see the latest machines from the world’s top manufacturers, alongside not to be missed features such as a world exclusive collection of Valentino Rossi’s most famous race bikes and a line-up of two wheel stars.

Meeting his biking fans for the first time since being crowned Kind of the Jungle, ‘I’m a Celebrity…Get Me Out of Here!’ winner Carl Fogarty officially opened the Show on Friday before meeting and greeting visitors throughout the day. Current British MotoGP hopeful Scott Redding was also in attendance on the opening day, flying back especially from testing his factory Honda in Malaysia.

Alongside Carl Fogarty and Scott Redding, race fans were treated to a world-exclusive collection of bikes from MotoGP legend Valentino Rossi, with the collection boasting an incredible nine of his former bikes. The British Superbike Championship was also back with a big presence, boasting a collection of their 2015 title contenders on the stand while the Tyco BMW squad of Michael Laverty, Tommy Bridewell and Alastair Seeley unveiled their 2015 colours to a packed audience. On Sunday, the ever-popular Peter Hickman also pulled the wraps off his RAF Reserves BMW Superbike he will be competing In. MCE British Superbike Championship Series Director Stuart Higgs commented: “It is fantastic to showcase MCE BSB in London, as we continue to bring the series closer to the fans and also reach out to a new audience. The Show has featured appearances by several of our 2015 contenders, headlined by our record-breaking Champion, Shane ‘Shakey’ Byrne. There have also been launches of the new Tyco BMW with Tommy Bridewell, Michael Laverty and Alastair Seeley plus the announcement of Peter Hickman becoming the 38th rider to join the grid with the RAF Reserves BMW team. The Show continues to grow in visitors each year and we continue to work closely with our media partner MCN to promote the championship ahead of what has is shaping up to be the most exciting season ever.”

Stuart Swaby, National Sales Manager for Yamaha Motor UK said, “It’s been incredibly busy and a fantastic platform for us to showcase our new models, with the new MT-09 Tracer and YZF-R1 very well received. We’ve had many strong leads to pass onto our dealer network and it’s a great kick-off for the selling season.”

Debbie Wiggins, Ducati Marketing Manager enthused “It’s been a great show with a high level of interest in our new models, especially the Scrambler range, MTS1200 and 1299 Panigale. Crucially, we also had many new young visitors seriously talking about buying which is extremely heartening.”

Rob Aherne, Managing Director of Motorcycling at Bauer Media summed up: ‘We are delighted that this year’s event has delivered a third straight year of growth, but more than that we feel that we have put on our best London show yet. ‘There was a real buzz about the place that reflects how vibrant the UK market is at the moment. It’s a big, big change from where the industry was at 18 months ago – I think we are all set for another great year.’

2015 also marks sixty years since the first ever edition of MCN and as a special birthday feature, they showcased some of the most influential bikes from the last sixty years. The February event kicks off a year of celebrations with the highlight being the launch of the MCN Festival of Motorcycling (May 16-17) giving bikers not only the opportunity to see and hear some of motorcycling’s most iconic machines but to also test ride the full spectrum of latest 2015 bikes.