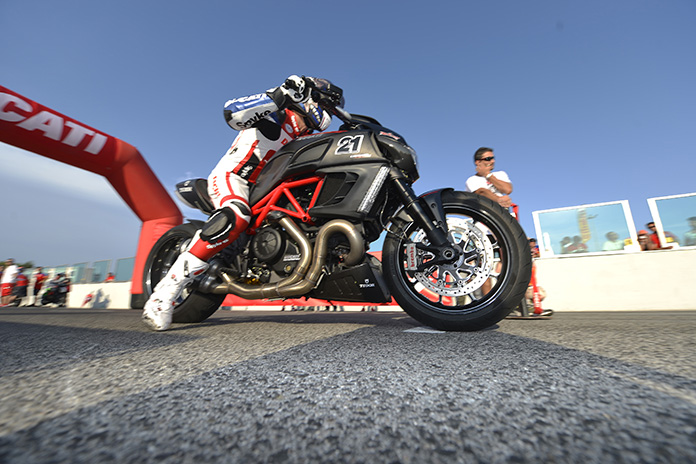 As the start of World Ducati Week 2014 approaches, news has it that it is going to be an incredible show no one would want to miss. One of the many initiatives that are being organised for the thousands of fans ready to invade Romagnola’s Riviera district and the Misano World Circuit “Marco Simoncelli” is the Drag Race, a competition which involves Ducati riders and which has to be the emotional highlight of the show and the real adrenaline booster.

For the very first time, WDW participants will be able to enjoy a double dose of the Drag Race. The eighth edition of the huge Ducati gathering will host the Drag Race on two days, Friday 18 and Saturday 19 July starting at 17:45. The showdown is set to happen along the starting straight of the racetrack, and this time the race is open to current Ducati competition riders as well as International living legends from the world of motorcycle racing who were in some way connected with the successful track record of the red bikes from “Borgo Panigale” in terms of sport competition.

The challenge is on and set for Friday 18 July at 17:45 for the first round of the Drag Race; the final showdown will be held the next day, Saturday 19 July, same time, same place. Ready to enjoy the event within the event, the thousands of spectators expected at World Ducati Week 2014 will turn the appointment in Misano into the most unforgettable and unique show as they watch the emotionally charged challenge.

As is customary, the Drag Race will be organised in collaboration with the Italian Motorcycling Federation (FMI) and is set to be a true battle of speed, going from standstill to the finish line, 400 metres down the straight. After the warm up including the practice sessions and qualifying round, in which each rider will have a single attempt at notching up the best time, things will get serious during head-to-head racing on the 162hp DIAVEL CARBON. Kitted out specially for the occasion in Drag Race livery, higher performance is ensured thanks to the complete set of Termignoni exhausts.

The Drag Race will give the WDW2014 public the chance to watch a unique challenge involving all the official Ducati riders currently taking part in all the international motorcycling sports championships alongside the names that have written motorcycling competition history and of course the history of Ducati.

Ready to compete for a win in the Drag Race will be the entire Ducati MotoGP Team, featuring Andrea Dovizioso and Cal Crutchlow, together with Ducati MotoGP Factory test rider Michele Pirro, Ducati Superbike Team riders Davide Giugliano and Chaz Davies, Ducati’s WSBK test rider Matteo Baiocco, the MotoGP Pramac Team with its official Ducati riders Andrea Iannone and Yonny Hernandez, the Althea Racing Team’s Niccolò Canepa, and Manuel Poggiali, who currently competes for the Barni Racing Team in the Italian Roadrace Championship (CIV). Also competing to win the Drag Race will be a line-up of famous names from the history of international motorcycling competitions and Ducati such as 2001-2006-2008 World Superbike Champion (and authentic idol for the Ducatisti) Troy Bayliss, 2011 World Superbike Champion (and Ducati brand Ambassador) Carlos Checa, much loved former official SBK riders Ruben Xaus and Régis Laconi, hall-of-fame SBK rider “Frankie” Chili, and finally the great Carl Fogarty, a motorcycling myth who has won more Superbike titles than anyone else.

TUDOR, the Swiss manufacturer of sports watches, already one of the main sponsors of this eighth edition of the World Ducati Week, will be the “Official Timing Partner” of the Drag Race, ensuring everything required to proclaim the official winner.

A Ducati supplier for over 20 years, Termignoni will be the technical partner for the much-awaited Drag Race, equipping each Diavel Carbon with a complete racing exhaust. This full exhaust system ends with a carbon fiber muffler with aluminium end-caps, high-tech, ultra-light materials that enhance the looks of the Diavel Carbon while also ensuring increased power even in the lower rpm range, leading to unprecedented levels of racing performance.

Once Saturday’s breathtaking Drag Race final round is over, the winner of this year’s edition will step onto the WDW2014 podium. All  riders will then see off the evening by acknowledging the public in the stands, ready to live out the rest of Saturday night’s big evening show at the World Ducati Week.

Early online ticket sales are matching expectations and indicate that countless Ducatisti from across the world have already secured their pass for the 2014 edition of World Ducati Week. All information, programme updates, ticket sales and a host of other details can be obtained via the http://wdw.ducati.com website