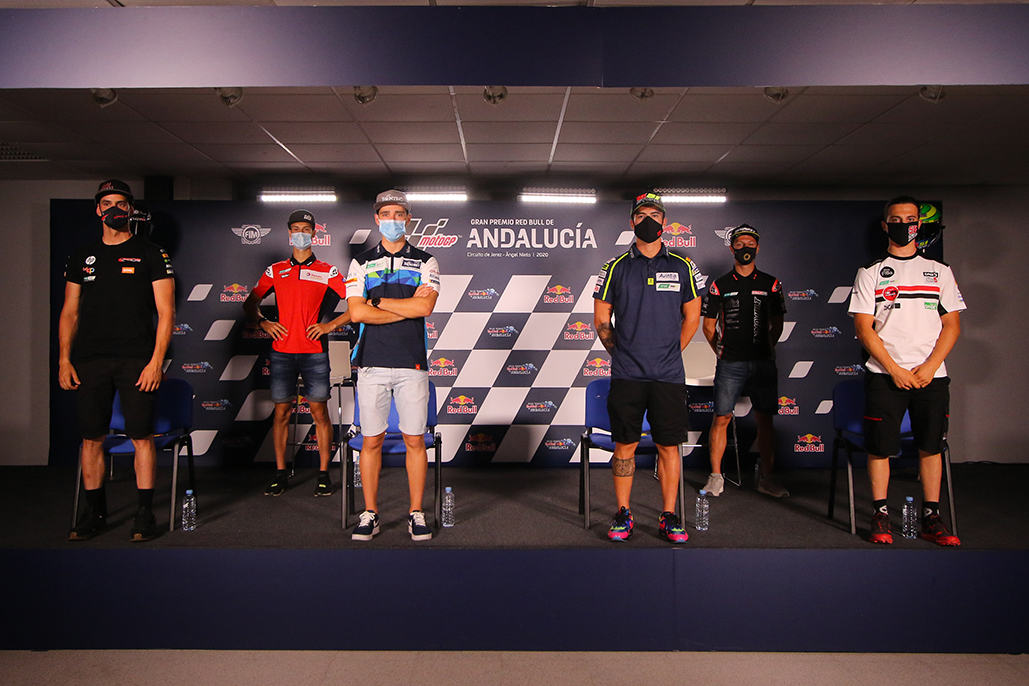 After of the first round of the 2020 FIM Enel MotoE™ World Cup at the Circuito de Jerez-Angel Nieto, we’re back at it again this weekend for another electrifying MotoE™ race. This time, the pre-event Press Conference gathered together Race 1 winner Eric Granado (Avintia Esponsorama Racing), Matteo Ferrari (Trentino Gresini MotoE), Dominique Aegerter (Dynavolt Intact GP),  Lukas Tulovic (Tech 3 E-Racing), Mattia Casadei (SIC58 Squadra Corse), and Jordi Torres (Pons Racing 40) to talk shop ahead of the lights going out, and it was Granado who spoke first…

“We start from zero now, I know it’s the same track but we have a new weekend so we have Free Practice, E-Pole and the race again! So my focus will be try to be competitive the same as last week, but it’ll be tighter this weekend, everyone now knows the track, how the lines are… and they’ve watched the race so for sure everyone learned from last week – including me. So I’ll try to work with my team to find the points where I can still improve, but everyone will too so it’ll be more difficult. But I’ll try and be consistent all weekend and try to stay at the top in the race again.”

And what about rivals? Does the Brazilian expect to be fighting it out with similar names once again?

“In MotoE you never know! For sure these guys will be there, and other riders I think will arrive, Niki Tuuli is one of them, and Mike Di Meglio, but like I said last week, the category is very fair, everyone has the same bike so for sure others who aren’t here can be fast and in the front group.”

Ferrari spoke next, and the Italian says he’s been pouring over the data to try and make another step forward this weekend after opening his 2020 account in second.

“I’m quite happy with last weekend, we improved every day. During the race I made a little mistake on the first lap so I’ll try to do best next race. I studied a lot during these days because I have to improve my riding style and the setup of the bike. Of course my goal is to get the podium, but also to win.”

And what about the differences in the 2020 Cup now we’ve completed a full race weekend?

“The torque of the bike is very important this year, at the start it’s very important because you can really feel it, it’s different, and the tyres. So every rider has to understand the front fork, the tyre, the settings. We’re also here in Jerez again and all the riders know the track!”

Next on the mic was Aegerter, who has been top of the timesheets at times and took a podium in his first ever MotoE™ race. What are his focuses this weekend?

“It was a great first experience last weekend, and the result was not bad. We got some good data to work on this week and we can improve in practice. This weekend will be new, and starting again on the same racetrack will be a new experience for everyone. So I think every rider and team can improve, and get closer. For me the goal is to be near the front in every practice, work slightly faster in the E-Pole now I have experience of how it is on one lap, and in the race we had a good start but then I had some contact and lost some positions so this made the race a bit more difficult. But I came back to the podium and this weekend we want to be in that place again.”

After a first full race weekend on his new machinery too, how is it round the Circuito de Jerez-Angel Nieto on the 2020 Energica Ego Corsa?

“The MotoE bike is something completely different to a fuel bike, especially the behaviour of the throttle. The most fun part is in the slower corners where you can really feel the torque the bike has. Also in the fast corners, you can open the throttle quite early, earlier than ‘usual’ on a different bike here, and that’s quite fun to understand how the bike works. We can have some fun on the bike, slide the rear tyres and make some smoke…it’s quite fun to ride!”

Tulovic was next to talk, with the German having gone from a solid start to his FIM Enel MotoE™ World Cup career to an incredibly impressive one as he took a front row start, the holeshot and then only just missed out on the podium.

“Now it’s the second race weekend for me, I know what to expect. I saw the E-Pole, my first one lap qualifying and my first six-lap race so I know how it feels now when you get overtaken, and how precise you have to be in qualifying. The plan this weekend is the same as last weekend, to make progress session by session and improve the laptime. Particularly in the Free Practice it’s important, and the E-Pole starting position, and the race where we have the points. Like Eric said everyone will be fast again, everyone is on the same bike and it’ll be crucial to make a good E-Pole and fight in the race.”

And what about refinements as he settles in?

“It’s really different to the Moto2 bike, the tyres, the weight, the way you ride, in Moto2 you’re sliding into the corner, in MotoE it’s not possible to slide quite like that into the corner. I have to change that riding style to be faster on this bike, but I feel I still have some time to improve, especially on corner entry and corner exit, and the guys who were already here last year already know better how to handle and use the rear tyre, so I think there’s still some time to improve. So we have a few more practice sessions and can make a step forward for sure.”

Italian rider and returner from last year Mattia Casadei took over from the German, and he’s got one definite focus: E-Pole, and giving himself less work to do in the race.

“I’m happy, the race was fun and I improved a lot from FP1 to the race. It was only the E-Pole for me, I didn’t do a good lap and I have to improve the E-Pole because in the race I’m strong.”

The battle plan, it seems, is to use the session in similar temperatures to refine that and get ready for Saturday.

“My plan is to do an E-Pole attack in FP2, to see what my lap is like, and I’ll try to do my best. But for me it’s good, I’m coming better and closing down the gap towards the first position.”

Finally, it was time to hear from Jordi Torres for the first time in a MotoE™ Press Conference. The Spaniard had an impressive first race and battled it out in a close group just behind the podium finishers, and he says that the first few laps are now his priority – to understand how Granado bolted off the line.

“I think in this category, the most important thing is the race as I felt a lot of difference between Free Practice, E-Pole and the race. In the race the riders the riders were really aggressive, and know how to squeeze the rear tyre in the first laps. And the riders that don’t have the experience, the rookies, I think that’s the most important thing for us. The first corner, first lap or lap and a half, try to push the rear tyre more because we have a very good rear tyre. And also few laps to learn!

“I think it’s very fun because all the bikes are so similar, and I think the most difficult thing to get the feeling on this bike is the riding style, understanding the entry of the corner, the speed in the middle and, as Dominique said, the throttle – open it as early as possible. And we need to understand how Eric Granado rides to know how to be faster in the first laps! So we don’t  give him a gap in the first laps, and can try to fight with him!”

And with that fighting talk in the best way, that’s it from Thursday! Check out Friday timesheets on motogp.com and then tune in for E-Pole on Saturday 25th July at 16:05 (GMT +2), before the race on Sunday at 10:05.