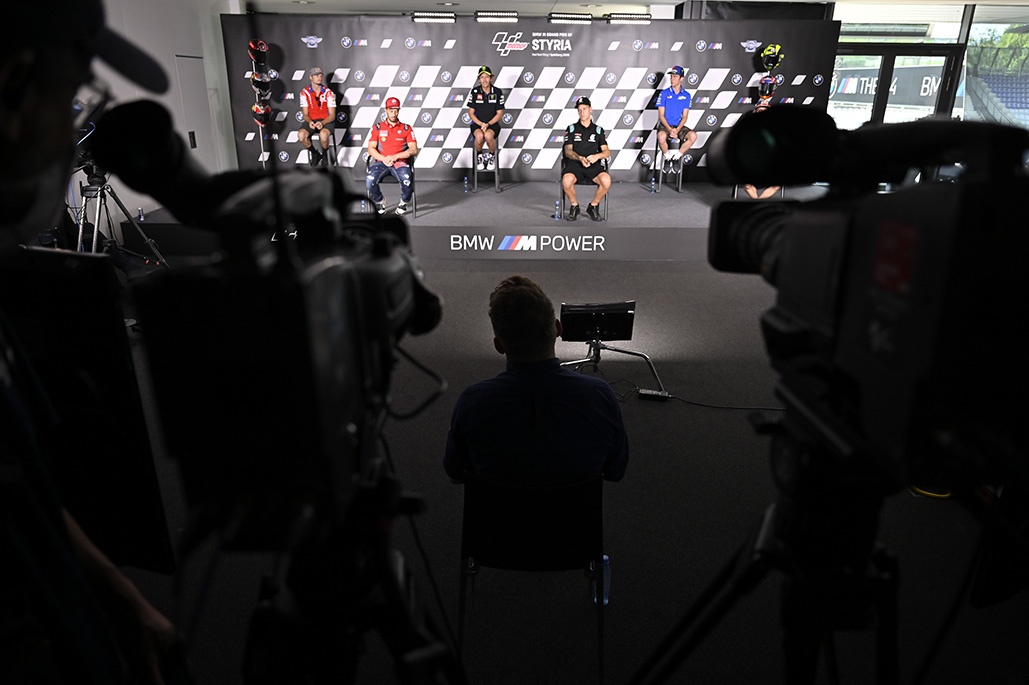 The pre-event Press Conference welcomes the paddock back to the Red Bull Ring for another stunning showdown.

FABIO QUARTARARO: “It was a pretty frustrating race last Sunday but like you say it was a strange Sunday after the big crash. Main thing is everyone was safe. In the first race I went straight into the gravel, i had a front brake like a clutch which wasn’t the best feeling. So we decided to change a lot of things from the front brake to try to improve but on the second lap of the second race I couldn’t be behind someone. Even alone I was struggling to stop the bike. We had problems on the pads into the callipers so that happened. Really frustrated because our pace was quite good, not for the victory but for the top five.

“For me it’s wide open but again to have a second race in Austria, Andrea is super fast here and in all the next tracks, of course I think he’s one of the main contenders but many manufacturers are there. I think the top five were four manufacturers so everybody is there and I think it’s quite fun. We will try to make our best this weekend, we had good pace last weekend so we want to work a little bit better so we are fighting with the podium guys.”

ANDREA DOVIZIOSO: “It was very strange after the race, but more I think because there were no fans and none of my friends at the race, more so than because of my future, which I’m really relaxed about, and especially about this season. I am focused on that so this is not the point.

“We try something new every time we do a race. You can understand a lot of things, more so than the practice sessions, so it’s normal for everyone. I think that we showed really good speed in the race, but I still don’t feel good mid-corner and on exit. We have to be better, and especially because we can bring that to upcoming tracks. Some competitors will be stronger this week because they couldn’t get the result last time and so they will be hungry and like everyone they will have seen things in the race. For sure, the weather will decide things. I think it will be hot tomorrow and Saturday, maybe Sunday not so much, but I think it will be a different weekend.

BRAD BINDER: “Jeez, the Friday was a complete mess. I spent more time on the access roads I think. But I kind of expected it because very time I’ve come to a new track its been super tough to find all the markers, stop the bike wheelie-ing and where to go and how to do it properly. Also the weather and not riding in some of the sessions didn’t help because it made it difficult to make the steps forward. Saturday wasn’t good qualifying 17th, but Sunday morning I felt much better and made a small step compared to what I did in qualifying and for the race I knew starting so far back would be super tough. After getting an alright start I just tried to start chipping my way through and see what the other guys were doing. I learnt a lot in these two races, to finish fourth was a shock for sure. I think when I was in eighth place I didn’t pass anyone again… so it was a strange race for sure. The good thing is we really know now after this race; we know the points I need to improve on, and I expect I can do a better job from the beginning this time around.

“I think the most important thing is I can really use the laps wisely now. When I’m on track I have a good base to work from and we can try and improve from there. Last Friday it was chaos, if I ended up doing 10 clean laps during the whole day that was is. But it’s always like this after a race for everyone though. I expect everyone has found something, seen where they need to improve and I’m looking forward to a good race in Austria.”

VALENTINO ROSSI: “It was a very difficult moment, yes, because it was very scary. During the crash, fortunately from the bike I saw just the bike of Zarco flying over Maverick, but sincerely I didn’t see that of Franco Morbidelli because it was too close and too fast. We were very lucky because neither bike touched us. It was a difficult situation and a very difficult restart. In the end, maybe you don’t have a lot of chances. So, restarting  on the bike wasn’t so bad in the end, but yeah, it was a difficult moment.

“For us, here, this track is difficult; we have to suffer a bit. Our pace is not fantastic enough to fight for a podium or a victory. But, in the second half of the race it wasn’t so bad. I was able to be consistent and keep a decent pace and take some points. It’s always strange to make another race at the same circuit but we have a lot of data so we need to start from a better point and try to improve and try to stay with the top group.

JACK MILLER: “Yeah after the previous two Grands Prix after crashing out of a decent spot in Jerez and never finding our feet in Czechia, we needed that little shot in the arm. All weekend seemed to be pretty good and we were able to capitalise on Sunday. Despite the restart, despite having the changed tyres and all that, I kept level headed and went out and did my work. The bike is working really well here, I can’t fault it. Much of the same this weekend hopefully. All the other boys will be faster again so we’re going to have to find something extra.

“For sure we’re always looking at each others’ data and whatnot. Dovi is definitely the man to beat around here at the minute. But to put it down to one thing I don’t know, we’ll see what we can do this weekend.”

JOAN MIR: “The truth is that last weekend we did a really good job. I think it was my best weekend. Finally we got a good result after searching always for good results but for some reasons and bad luck we couldn’t get a result. Anyway, I’m happy for this and let’s see if i can be here a couple more times.

“We have a good base, a competitive bike, but we lost a bit in sector 1 and sector 2 and then in 3 and 4 we recovered a little bit of time. I was behind the Ducatis a lot of laps and I was able to study the strong and weak points and for sure I have good info for this race!”

Here we go again! It’s time to reset and reload to attack the Red Bull Ring once again, with MotoGP™ heading out for FP1 at 9:55 (GMT +2) on Friday before the race starts on Sunday at 14:00. DON’T MISS IT!