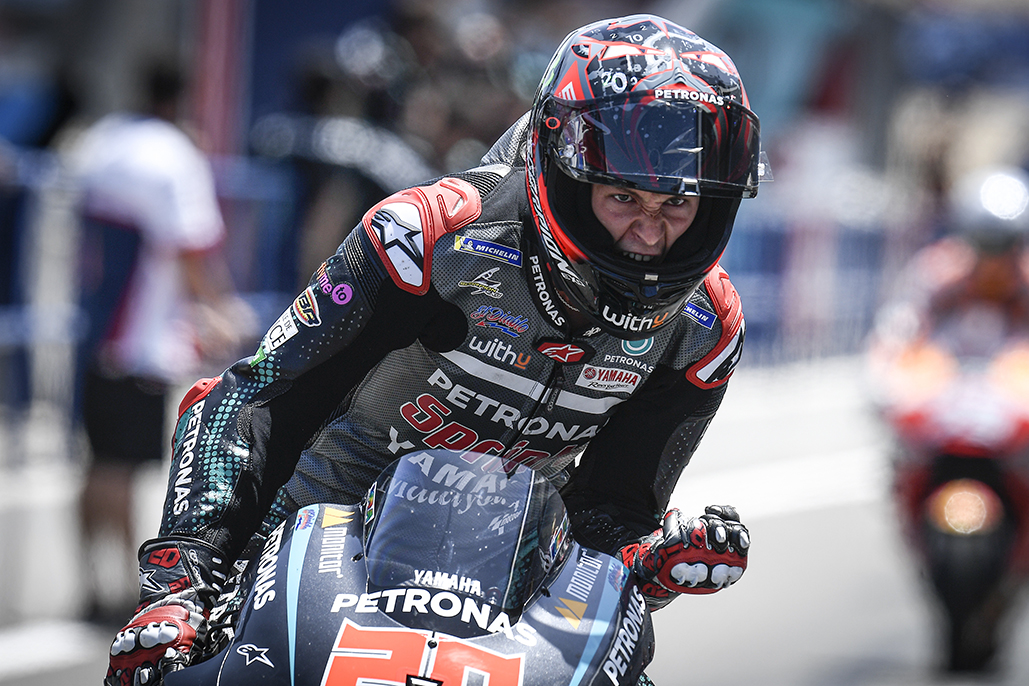 The abdication of the ‘King’ will be temporary. But the opportunity could also prove a big one…

MotoGP™’s return to the stage in the Gran Premio Red Bull de España was dramatic, euphoric and, for some, tinged with shades of tragedy: just as the curtain raised for the first act of 2020 for the premier class, the reigning Champion and two race winners found themselves on the sidelines or heading for them. Before we returned to competition it was Andrea Dovizioso (Ducati Team) in the limelight as he injured his collarbone just a couple of weeks before racing returned, but the focus and the shuffle of the pack has since shifted to Marc Marquez (Repsol Honda Team), Alex Rins (Team Suzuki Ecstar) and Cal Crutchlow (LCR Honda Castrol). The latter two will try and race, but the Gran Premio Red Bull de Andalucia will feature no reigning Champion, and the events of the first race weekend of the year already have many wondering what is to come in the fight for the crown…

Through it all, however, Fabio Quartararo set a new lap record, smashed that again, and won his first premier class race – and the first for Petronas Yamaha SRT. It was the first French win since 1999 too, and the first time an independent Yamaha took to the top step in MotoGP™. Maybe as the hands get dealt and the year goes on, it will prove a history maker of a season, but for Quartararo it was already a history-maker of a day. Where last year Jerez brought heartbreak with a mechanical problem denying ‘El Diablo’ his first podium, this year it brought glory – and the grid look hard pushed to stop the Frenchman from a rinse and repeat. Can they? Heading the list of candidates heading in must surely be Maverick Viñales (Monster Energy Yamaha MotoGP)…

Having struggled at times in recent seasons in the earlier stages of the race – compared to his dominant displays in 2017, for one – the Viñales that shot off the line on Sunday showed that was not an affliction he intended to allow to hang around. The number 12 was the man in charge early on, with Marquez threatening behind him – and then running off when in front of him, leaving Viñales to contend with Quartararo, Dovizioso and Jack Miller (Pramac Racing). Was the bolt off the line, the soft tyre and the hot pace early on Viñales’ play against Marquez? Was it purely data and feel driven? Was it unexpected that he couldn’t quite stay with Quartararo? Viñales’ approach in the second round at the same Circuito de Jerez-Angel Nieto will certainly have us glued to our screens – he was, after all, the man to watch throughout much of preseason. Don’t count out Valentino Rossi (Monster Energy Yamaha MotoGP) and Franco Morbidelli (Petronas Yamaha SRT) from the fight at the front either.

And then there’s Dovizioso. The Italian was on the MotoGP™ podium at Jerez for the first time, despite technically still being on the comeback from injury, and despite the fact that the track hasn’t suited the Ducati in the same way it often has their rivals. The podium and the points are valuable as Marquez is forced to watch from the sidelines, and especially given the ‘Ducati territory’ of two races at the Red Bull Ring still to come. The speed shown by Dovizioso and fellow standout performer Miller, who was only just beaten to the podium by the more experienced Italian, will give the Bologna factory some serious heart… and who knows what they can do with more track time and data, and a race already contested? What can Francesco Bagnaia (Pramac Racing) do after his serious turn of speed? Danilo Petrucci (Ducati Team) should also be feeling a little less sore after his crash in the Wednesday test, and he’ll expect to be back in and further up the mix.

Speaking of the mix, that’s something KTM very much joined in the first race of the season – and the Austrian factory are also third in the constructors standings after the first race. Pol Espargaro (Red Bull KTM Factory Racing) led the charge and fought for fifth before being forced to settle for sixth, and Miguel Oliveira (Red Bull KTM Tech 3) also impressed as he took P8 and equalled his best in the premier class. Brad Binder (Red Bull KTM Factory Racing) will be another to keep a serious eye on in round two, too. The South African was P13, but after suffering run off early in the race he then seared around Jerez as fast as anyone in the front group. And remember, he’s a rookie! Fellow rookie Iker Lecuona (Red Bull KTM Tech 3), who was unable to finish the race, will likely take a keen interest in all the data he can ahead of the Andalucia GP – with KTM having shown an impressive leap forward already in 2020.

Honda, meanwhile, will be missing their ace card in Marc Marquez, but Alex Marquez (Repsol Honda Team) will take heart from some points and a solid finish in his first race – and as top rookie. Can he take a step forward? Can Takaaki Nakagami (LCR Honda Idemitsu) do too? The Japanese rider finished tenth on Sunday, and he’ll be looking for more. One man looking for even more than that might be Cal Crutchlow though. A crash in Warm Up ruled him out, and he’s since discovered and had surgery on a broken scaphoid. But the Briton is planning to race, and will not want to simply make up the numbers. How far through the pain barrier can Crutchlow push?

That will also be a question asked of Alex Rins. A dislocated shoulder stopped the Spaniard from competing in the first round, but he’s going to try and race – and will likely be focused on bagging maximum points as Marquez’ mistake sadly proves even more costly than his. Teammate Joan Mir is also a question mark going into the Andalucia GP, as Mir has looked to have taken a step forward in his sophomore year of 2020… but crashed out too early for us to see his hand in Jerez. Suzuki started the season on nil points, and the Hamamatsu factory will want much more this time around – especially after a positively buzzing aura of positivity in preseason.

Aprilia, meanwhile, took their first point of the season with Bradley Smith (Aprilia Racing Team Gresini), and were another who suffered from a DNF as Aleix Espargaro failed to finish. Can both take the fight to the points and the top ten after more track time at the Circuito de Jerez-Angel Nieto? We will find out soon enough…

FP1 sees the refinements begin at 9:55 (GMT +2) on Friday, before we do it all again in what’s bound to be another spectacular MotoGP™ race on Sunday at 14:00. Can anyone stop Quartararo?