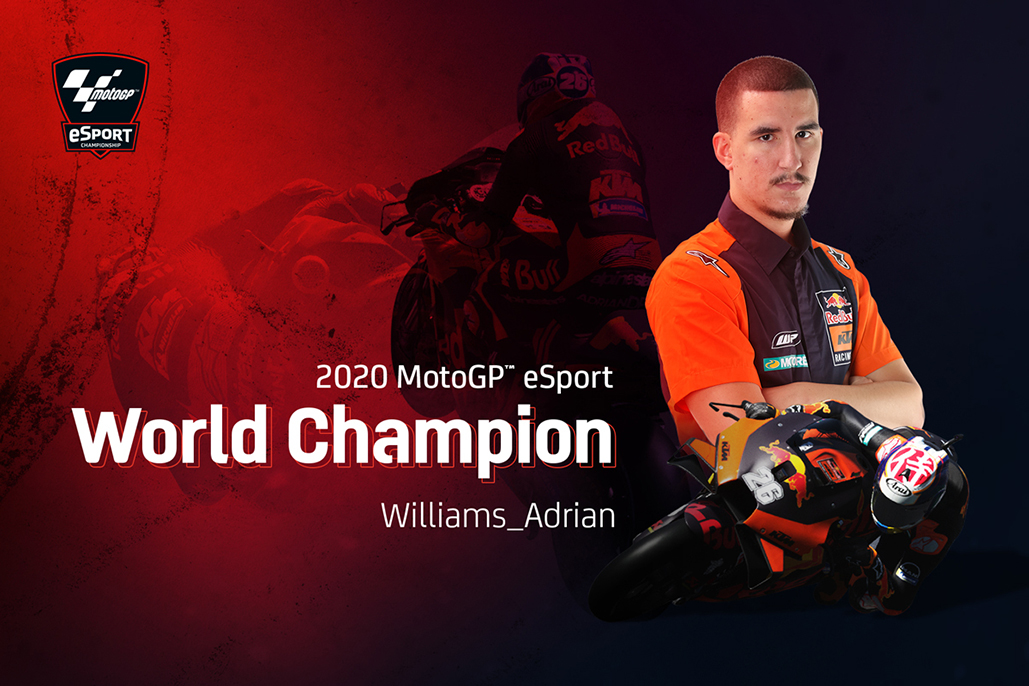 The 2020 MotoGP™ eSport Championship has a new king! Williams_Adrian held his nerve in a dramatic and emotional fight that went all the way to the final race.

Williams_Adrian can call himself the new MotoGP™ eSport Champion after two measured rides saw him win a dramatic Global Series finale that was packed with emotion and controversy, going right the way to the wire. The Spaniard is the winner of a fabulous BMW M235i xDrive Gran Coupé, the top prize in this year’s MotoGP™ eSport Championship, provided courtesy of series supporter BMW M.

Eleven gamers from around the world earned the right to represent one of the eleven current MotoGP™ teams for the four-round Global Series, an eight-race event that has determined the wearer of the 2020 MotoGP™ eSport crown.

Due to the restrictions placed on the MotoGP™ paddock during the global pandemic, MotoGP™ eSport Global Series events can‘t be held on site so the eleven finalists competed against one another with the official MotoGP™20 Videogame while communicating via a communal video call in their homes. For the last event, they took on Silverstone and Valencia’s Ricardo Tormo Circuit over ten laps in the season’s final two races with double points of offer for each bout.

He came into the final round 39 points clear of brother Williams_Cristian (Team Suzuki Ecstar) and 61 up on trastevere73. But any hopes of sewing up the Championship in Race 1 soon came undone. A tough move by Petronas SRT Yamaha’s Sanshoqueen put the leader on the ground on the first lap and in a dramatic couple of seconds, Williams_Cristian also found himself on the floor. The race soon became an exhibition of overtaking as Williams_Adrian fought back to fifth, and his brother to sixth.

All the while trastevere73 led from the front in a vintage performance that showcased all of his very best skills. He led outgoing champion AndrewZH home by 2.2s after ten laps of top class racing, with Indonesian moe taking a first Global Series podium with a measured ride to third.

Emotions were running high after Race 1 with several of the leading names unhappy with a number of overtakes. But soon they were focused on Race 2 as MotoGP™ star Aleix Espargaro (Aprilia Racing Team Gresini) and Aprilia technician Antonio Jimenez handed out some advice on how to deal with the Circuit Ricardo Tormo.

It was another tense affair. Trastevere73 led from the first corner, with Williams_Adrian and Williams_Cristian slotting in behind. And it ended that way after a tremendous study in concentration from the Italian, who won by just 0.5s. But Williams_Adrian’s second place was enough to seal his maiden MotoGP™ eSport crown, with his brother finishing a close third.

It means Williams_Adrian won the top prize of a BMW M235i xDrive Gran Coupé for an excellent season. Trastevere73 got his hands on the second prize, an Aprilia RS 125 GP Replica. And Williams_Cristian won a Lenovo Legion Y740 Laptop for his efforts in third overall, rounding out another stunning season of competition for the MotoGP™ eSport Championship.

The fourth year of the series has been another brilliant success, with plenty to play for and close competition to keep the adrenaline pumping throughout. So keep your eyes posted on MotoGP™’s social media channels for news on the MotoGP™ eSport Championship coming back bigger and better than ever in 2021!