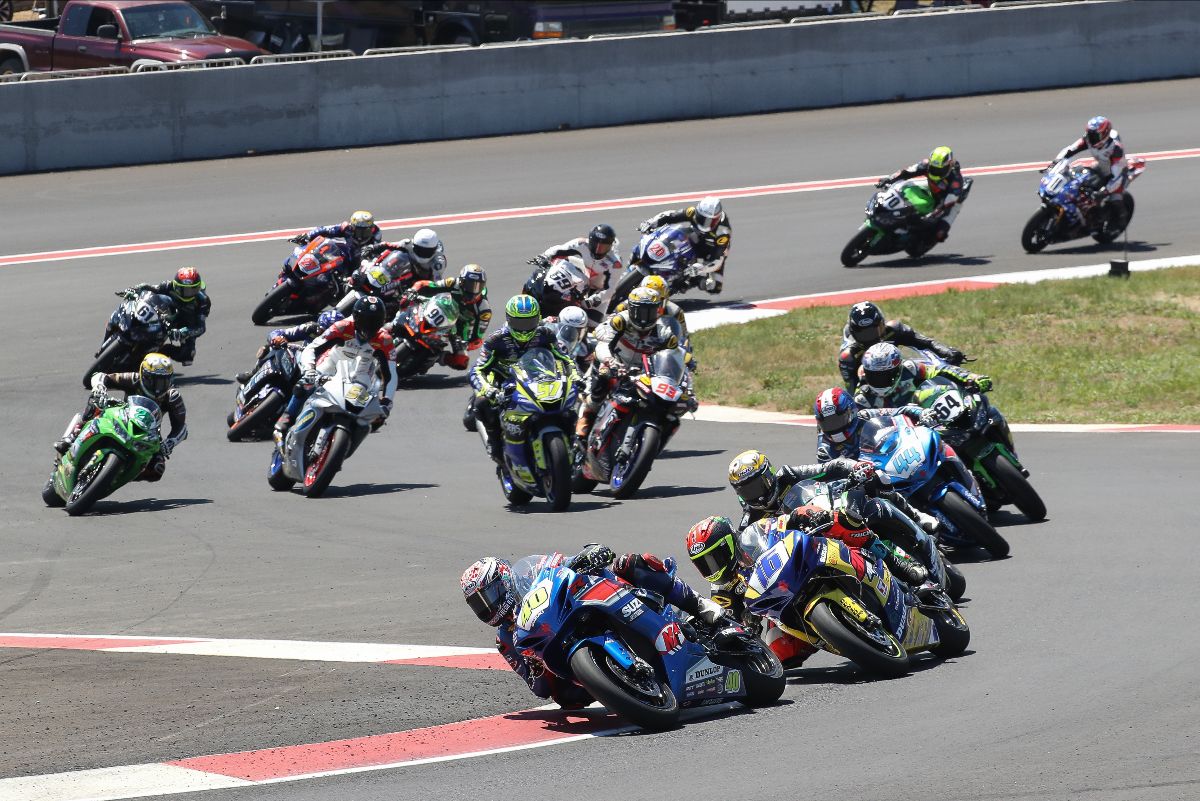 Support Class Action On A Hot One In Washington Is Heated

As he did on Saturday in the Pacific Northwest, Corey Alexander won the Stock 1000 race to open the festivities and he set the tone for what was a scorching hot day in Shelton, Washington. Jackson Blackmon Racing Yamaha’s Jackson Blackmon followed suit, taking the Twins Cup race win for the second straight day and so did M4 ECSTAR Suzuki’s Sean Dylan Kelly, the Floridian winning Supersport on Sunday as he did on Saturday.

Things got changed up a bit in the SportBikeTrackGear.com Junior Cup as Saturday’s fourth-place finisher Tyler Scott took the victory on his KTM on Sunday.

Twins Cup: Blackmon Again
Ridge Motorsports Park is a long way from Jackson Blackmon’s home in South Carolina, but the track is now near and dear to Blackmon’s heart after he did the double aboard his Blackmon Racing Yamaha with two wins in Twins Cup this weekend. On Sunday, Blackmon overtook polesitter Anthony Mazziotto on the opening lap, and he was never headed despite facing a very strong challenge from Mazziotto aboard his Veloce Racing Aprilia. At the checkers, Blackmon nipped Mazziotto by just .181 of a second. Third place went to Robem Engineering Aprilia rider, who crossed the finish line a little over three and a half seconds after Mazziotto.

“I couldn’t have dreamed for this weekend to go so good,” said Blackmon. “I’m always so nervous going into every race. I just never know what can happen. We made, I wouldn’t say a risky move, but we tried something different in warmup. I didn’t really have any major complaints in the race. We were just trying to make it a little better, and sure enough, I loved it. We put it on for the race. I wanted to get up front and put my head down. Yesterday, lap two, when Kaleb (De Keyrel) got by, I got to the front and then I took a breath in, and I felt like I was instantly off the back. Today I was like, ‘I have to keep charging. I can’t wait up.’ I think that was the difference today. It took a lot and I dug deep. I kept seeing the group drop smaller, smaller, smaller, smaller on the pit board. I knew (Anthony) Mazziotto wasn’t going nowhere. He’s been fast all weekend. I saw the 516 on my pit board. The last lap, I tried to pick it up and try and kind of play defensive. It just worked out. All these guys were rolling. Even in the beginning of the race doing those 48s is insane. I’m going two seconds a lap faster than I did on my Suzuki and that just shows how well this Yamaha is handling, because we know how technical this track is. Along with that Yamalube in the bike keeping that thing running cool all weekend. No overheating issues. My dad has been killing it. I can’t thank everybody enough that has been behind me. It’s been a long time coming, but we got the momentum going. The bike feels great. I’m ready for more.”

Stock 1000: Alexander, Part II
In Stock 1000 race two, Altus Motorsports Suzuki rider Jake Lewis started from the pole, but a mechanical issue took him out of the race before he completed the first lap. Ridge Motorsports Park/DiBrino Racing Kawasaki’s Andy DiBrino took over the lead for two laps until HONOS HVMC Racing Kawasaki’s Corey Alexander moved to the front. As the laps wound down, Jones Honda’s Ashton Yates moved into second place and put a serious challenge on Alexander for the lead. Alexander held off Yates, however, and got the win by a little under half a second over Yates. Travis Wyman Racing BMW rider Travis Wyman, who had started second on the grid, was shuffled back in the pack, but he fought his way forward during the 13-lap race and finished third at the checkered flag.

“For me, this is one of the tracks on the calendar that I just wanted to get through, honestly,” Alexander said. “After last year, I couldn’t figure the place out. Fortunately, the new pavement is really, really great. It makes it honestly a lot more safe, I feel. That was probably the biggest thing last year. I just wasn’t confident overall. Otherwise, my bike is so much better than it was even last round. Every time I get on it, it just keeps getting better. That’s really due to the guys at Graves Motorsports and just everybody on my team. We’re throwing everything at it to be in this championship hunt. Unfortunately for Jake, he made that a little bit easier for me to make up what we lost in Atlanta. Otherwise, it was a hot race. I pulled a little bit of a gap, and I could kind of pull out a rhythm like mid 43’s. I knew I had a little bit left in the tank if I needed it, but I was hoping not to have to go there. Then, all of a sudden, I could hear somebody, and I thought it was Andy (DiBrino). I looked behind me one lap, and it was Ashton (Yates). Of all the guys late in the race that I wouldn’t want to be behind me would be him because I know how good he is with the bike sliding around and stuff like that. Watched my lap board come down to zero, then I had to make a last push there the last few laps. I don’t know if they showed it on TV, but it was a little hairy there. Just happy to walk away with it safe.”

Supersport: Kelly Times Two
M4 ECSTAR Suzuki Supersport rider Sean Dylan Kelly was unstoppable at Ridge Motorsports Park as he followed up his race one win on Saturday with a race two win on Sunday. Kelly started from the pole, and as has been the case for the better part of a couple of seasons now, HONOS HVMC Racing Richie Escalante was his staunchest challenger. Unlike race one, however, where Kelly won by a fairly comfortable margin, the gap in race two was far from comfortable as Escalante kept gaining on Kelly as the race neared its conclusion.

At the finish line, Kelly took the checkers by a scant .107 of a second over Escalante. Third place again went to Kevin Olmedo, the Altus Motorsports Suzuki rider matching his podium finish from Supersport race one.

“It was a great weekend,” said Kelly. “We got pole again which is always great but it’s not the objective of the weekend. The objective is to fight for the wins and to win races. So, to be able to do both, do pole position, track record and win both races is definitely a great job. We have to be proud of the work that we’ve been doing. We’ve just been chipping away. We know we have racetracks that we’re better at. We know we have racetracks that (Escalante is) better at. This is clearly a good step. Last year, we struggled more against Richie and this year we were able to pull the double, so that’s really important for us. Overall, I’m just really happy with the work. We have to keep our feet on the ground. We’re going into Laguna, and I feel like that’s a track where we just have to keep on doing the same work, step by step, every session outdo our maximum. I feel really good with the package and I’m really grateful for how we’re feeling.”

SportbikeTrackGear.com Junior Cup: Scott Rebounds
The final race of the weekend at Ridge Motorsports Park was in SportbikeTrackGear.com Junior Cup, and it was a race that polesitter and Scott Powersports KTM rider Tyler Scott absolutely dominated from start to finish. The only rider to hang with Scott, at least for a little while, was Landers Racing Kawasaki’s Ben Gloddy. At the finish line, Scott won with a gap of more than three and a half seconds over Gloddy. With the win, Scott took over the championship lead by just two points over Gloddy, so it looks like the title will go right to the end of the season. Third place went to Veloce Racing Kawasaki rider David Kohlstaedt, who survived a scary moment right before the checkered flag when Rodio Racing Kawasaki’s Gus Rodio made contact with Kohlstaedt’s rear tire. Thankfully, neither rider crashed and Kohlstaedt was happy to finish o. the podium for the second straight day.

“Off the start I got a little gap and tried to keep it,” Scott commented. “I was looking down at the (lap) times, and we were kind of going really slow compared with what we usually do in qualifying. But I kept my head down and kept pushing. I saw on the board that (Gloddy) was four seconds back. Then, right at the end, he started making up some ground, so I just had to put my head down and push to the finish line. Amazing race, and thanks to my team.”