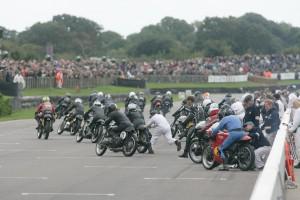 Schwantz, who won legions of fans with his no-holds-barred style on his way to the 500cc world title in 1993, and made his Revival debut last year on the ex-Geoff Duke Featherbed Norton, will ride a 1961 Manx Norton 500 with Rodney O’Connor.

Fellow American Spencer, a two-time 500cc World Champion himself, will also be Norton-mounted, riding a 1962 model with entrant Julian Ide.

Australian Corser, whose World Superbike crowns came in 1996 and 2005, is, as usual, BMW-mounted, and will have a rare Kaczor R50S at the disposal of himself and co-rider Sebastian Gutsch.

Former GP racers Steve Parrish and Jeremy McWilliams are always popular additions to the Revival line-up. Both return for 2015 with Parrish, Barry Sheene’s close friend and team-mate during his 1977 500cc title-winning season, riding a 1962 Matchless G50 and McWilliams – twice a Barry Sheene Memorial Trophy winner – on a 1961 Norton.

Isle of Man TT winners Mick Grant and Gary Johnson are reunited on the 1964 MV Agusta 500/3 on which they won at Goodwood in 2013, while another TT winner, Charlie Williams, has a 1962 Norton at his disposal.

Two more TT victors, Ian Simpson and Michael Rutter, also return. Rutter will ride a 1962 Manx Norton with Simpson on a 1966 Hansen Honda CR450. Fellow road-racing favourites Maria Costello and Keith Amor will be attempting to upstage them on, respectively, a BMW RS54 and a Norton.

Derek Crutchlow, father of MotoGP star Cal Crutchlow, and himself a former World Endurance Championship racer, will make his Revival debut on a Norton, as will Taylor Mackenzie, son of three-time British Superbike Champion Niall; the latter on a bike entered by GP winner Chas Mortimer.

The Barry Sheene Memorial Trophy, which is this year for 500cc grand prix motorcycles of 1960-66, comprises one race on Saturday and one on Sunday, with a mandatory mid-race rider change in the pits for each bike and overall results decided on the aggregate finishing times of both races.