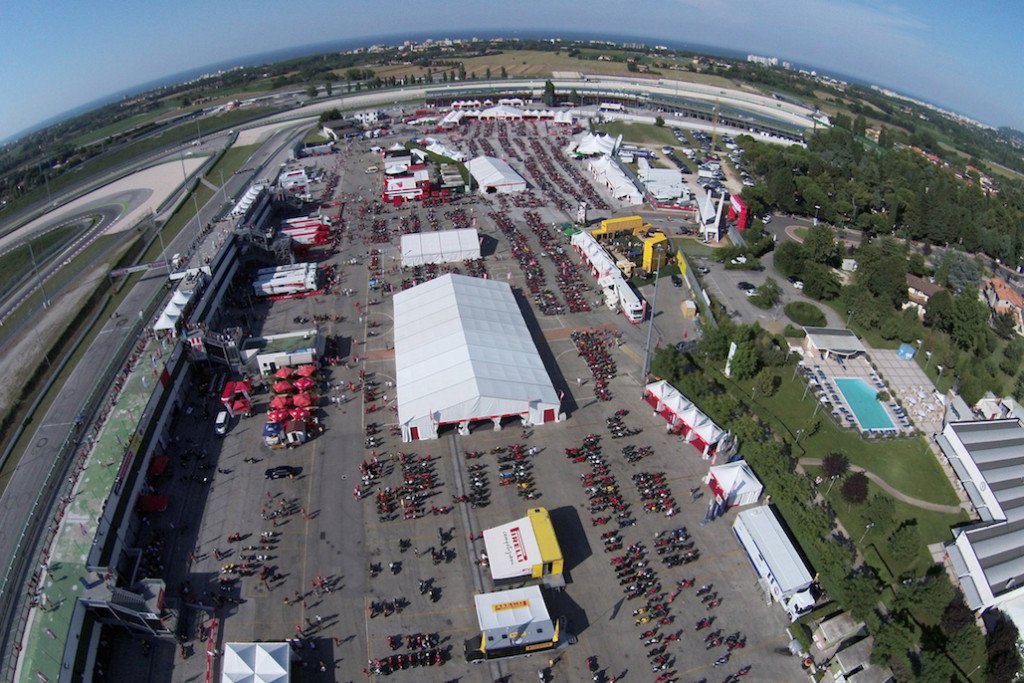 There are just over three months to go until the 9th edition of the World Ducati Week and it’s already all systems go for the complex organisation of the event. The location of the unmissable event is the “Marco Simoncelli Misano World Circuit” where thousands of motorcycling enthusiasts from all over the world will gather from 1 to 3 July.

Tickets for WDW2016 are now on sale and participants can choose the formula best suited to their requirements. Rider passes are available (rider and motorcycle) and so are passenger/visitor passes valid for just one day or for the entire three-day event. The three-day pass – subject to availability – includes a selection of interesting opportunities including the chance to ride your own motorcycle round the prestigious Misano World Circuit racetrack. Further information on purchasing tickets and passes is available on wdw.ducati.com.

The 9th edition of the World Ducati Week will most certainly be a special one as it coincides with such an important date as the 90th anniversary of Ducati. Founded in 1926 by the Cavalieri Ducati brothers (the company takes its name from the family), the Bologna-based motorcycle manufacturer has been creating dreams on two wheels, unique in their style and technology and powered by the beat of a “desmodromic heart” since 1946. Bikes that have achieved significant accomplishments and written unforgettable pages of the world’s motorcycling history. WDW2016 will be the highlight of the company’s 90th anniversary celebrations with the Ducati community. With this important anniversary in mind, the paddock of the “Marco Simoncelli Misano World Circuit” will be alive with numerous initiatives including an area dedicated to the 90th anniversary celebrations thanks to which participants will be able to explore the company’s history. The atmosphere will be unique and those present will have the opportunity to meet the heroes who have made the Ducati brand and bikes as great as they are today.

The Ducati Heritage Contest will reward the most stunning of all the amazing historic bikes present in the paddock during this special edition of the World Ducati Week. All historic single-cylinder bikes produced between 1946 and 1978 will be eligible for the contest, along with twin-cylinder bikes produced between 1971 and 1996. During WDW2016 a special team of judges will select the best conserved and restored bikes. The winner will be chosen from amongst all the motorcycles participating in the final and its owner will be awarded by one of the legendary riders from Ducati’s history.

Another event which will involve the whole Ducati community is the Ducati Garage Contest, which, since WDW2002, has awarded the best custom bikes created by Ducatisti from all over the world. Participants must first make it through an online selection, sending one or more photos of the bike they’ve created, together with the competition entry form, to the following address: [email protected] by 29 May 2016 at the latest. Ducati will select the 10 best-looking bikes and these will have the privilege of being displayed during WDW2016. The final selection will then take place in Misano and the public shall have the last say in proclaiming the winner of the coveted award for the best custom bike.

Alongside these, a multitude of other initiatives are being devised to make the 90th anniversary of Ducati really special and well and truly celebrated at WDW2016. In order to communicate and share such an important anniversary, Ducati has activated various channels such as the #‎90YearsOfDucati hashtag present on the official Facebook page where every week, on Thursdays, historical images and stories are published with the active involvement of followers and the international DOCs (Desmo Owners Clubs).

WDW2016 will mark another important achievement. In order to demonstrate the close attention Ducati pays to sustainability in a practical way, the Bologna-based company has requested official certification in accordance with the ISO 20121 regulation. This will officially certify that an event such as the World Ducati Week, which can draw over 60,000 enthusiasts from all over the world, can also be synonymous with well-balanced management from an economic, environmental and social point of view.

The countdown to WDW2016 has begun and being there will be a unique experience, to be lived to the full. Ticket prices for the World Ducati Week 2016 are as follows:

Purchasing a 3-day pass enables you to sign up for one or more tours on the WDW2016 Tour programme, lasting a full or half-day. These are motorcycle itineraries through the most attractive areas of Emilia Romagna including the Riviera and its hinterland and the Republic of San Marino.

“MOTOR VALLEY” TOUR (Thursday 30 June 2016, 9.15am – 5.30pm) – Setting off from the Ducati headquarters in Borgo Panigale, Bologna, and ending up at the “Marco Simoncelli Misano World Circuit”, Misano.

“NINETIETH” TOUR (Thursday 30 June 2016, 9am – 7.30pm) 290 km – Setting off from the Ducati headquarters in Borgo Panigale, Bologna, and ending up at the “Marco Simoncelli Misano World Circuit”, Misano.

For further information on the World Ducati Week 2016 see wdw.ducati.com and on social media using #worldducatiweek.

Borgo Panigale Experience: the Ducati Factory tours are back