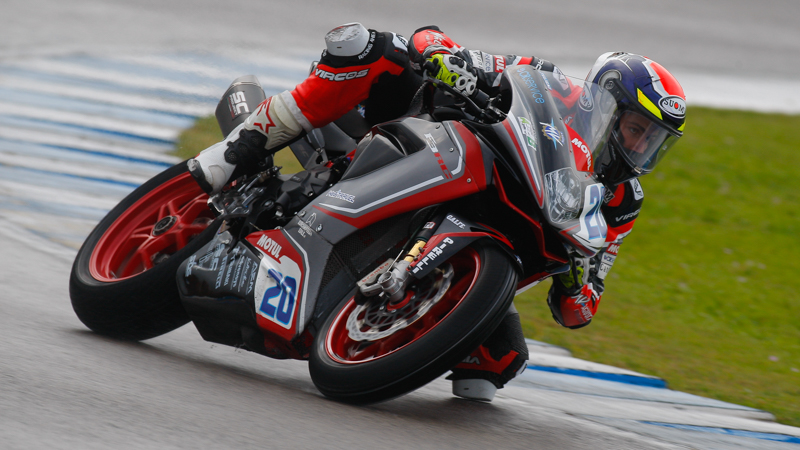 Despite the rain, numerous red flags and a very busy Circuito de Jerez – Angel Nieto track, the FIM Supersport World Championship’s leading riders took to the circuit and made the most of the testing time. After the 2018 and 2019 WorldSSP seasons went down to the final round of the year, testing provides opportunities to gain critical advantages and get ahead of the opposition come the season’s start. Taking advantage of difficult conditions, it was Federico Fuligni (MV Agusta Reparto Corse) who led the way, ahead of Steven Odendaal (EAB Ten Kate Racing) and Randy Krummenacher (MV Agusta Reparto Corse).

With heavy rain drenching the Spanish circuit in the morning, track action was initially very little for the World Supersport field. On top of the test back in November, WorldSSP rookie Andrea Locatelli (BARDAHL Evan Bros. WorldSSP Team) elected not to take to the circuit all day, with the rain proving too much for the Italian’s liking.

Federico Fuligni (MV Agusta Reparto Corse) had plenty to shout about as he got his head around tricky, inclement conditions. The Italian will be eager to make a step in 2020, remaining with the team he joined in 2019. Spending much of the afternoon as top WorldSSP runner and setting a good number of laps during wet weather running, Fuligni ended day one in top spot. Vital data gathering and wet weather riding mean Fuligni first day of testing in 2020 was a success.

South African representation returns to WorldSSP in 2020, as Steven Odendaal (EAB Ten Kate Racing) moves over from the Moto2™ World Championship. Back on track and eager to impress in 2020, the 26-year-old set more laps than any other WorldSSP Yamaha rider on his way to second at the end of the day. The Ten Kate Racing team return to the World Supersport grid in 2020 and have 73 wins in their time in the class before; important testing will prove pivotal on whether they can add to that tally.

Randy Krummenacher enjoyed a successful day as he got his first wet track time in on the MV Agusta F3 675. The Swiss rider, who clinched the WorldSSP title in 2019, featured inside the top ten on combined times early in the day and was top WorldSSP rider at lunch time, before placing third come the close of business. Krummenacher was second in the race at Jerez in 2019, beaten only by then-teammate, Federico Caricasulo.

The GMT94 Yamaha duo of Jules Cluzel and Corentin Perolari were also out on track at Jerez, garnering vital data and track time in tricky conditions in order to be prepared for the 2020 season. Setting 35 laps between them and being split by just 0.195s, Cluzel pipped Perolari and they finished fourth and fifth in their class respectively.

The only other two WorldSSP riders on track were Dutchman Jaimie van Sikkelerus (MPM Routz Racing Team), who only took to the track for 22 laps during the afternoon. He was joined on track by fellow Yamaha rider Loris Cresson (OXXO Yamaha Team Toth), who didn’t complete a flying lap. The Belgian rider’s teammate, Peter Sebestyen, is not present at the test this week, whilst Kawasaki Puccetti Racing are also absent from Jerez.