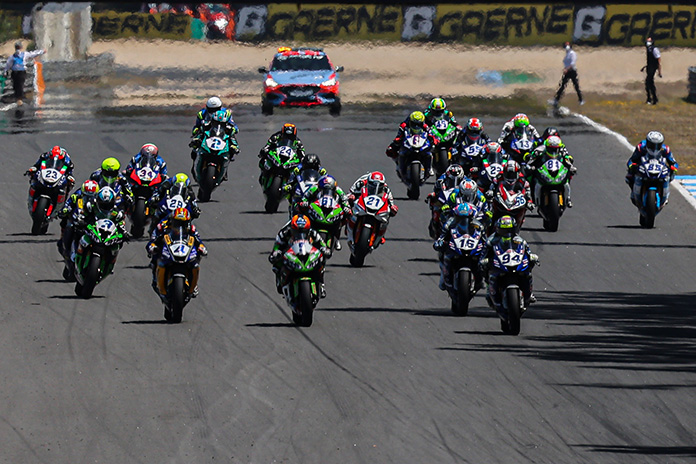 After a two year wait between rounds, the WorldSSP paddock heads back to Italy with a 35-strong grid.

There is an intense battle developing at the top of the standings between Steven Odendaal (Evan Bros. Yamaha WorldSSP Team) and Dominique Aegerter (Ten Kate Racing Yamaha), the only two riders to have won in the four races ran so far in 2021, with just six points separating the pair despite Odendaal taking three wins to Aegerter’s one. A retirement for Odendaal last time out in Estoril coupled with Aegerter’s emotional victory meant the Swiss rider was able to close in at the top of the standings.

Both Odendaal and Aegerter have experience of the Italian circuit from their respective Moto2™ days, with Odendaal taking a best result of 17th in 2018 while Aegerter has a best result of fifth, in 2013, but three other top-ten finishes between 2010 and 2014. It will be both their first races at the circuit on WorldSSP machinery, with Jules Cluzel (GMT94 Yamaha) hoping he can take advantage of their inexperience on their Yamaha YZF-R6 machines at Misano to close the gap; the French rider claimed two victories in 2014 and 2015, when WorldSSP ran to one race per weekend, and a double victory for Cluzel in 2021 would mean he becomes the most successful rider at Misano in terms of wins in WorldSSP, going ahead of five-time Champion Kenan Sofuoglu.

There are two other winners of a WorldSSP race at Misano on the 2021 grid with Randy Krummenacher (EAB Racing Team) the winner last time the Championship visited Misano in 2019 and then-teammate Federico Caricasulo (GMT94 Yamaha) who won in 2018. Both have had ups-and-downs to their return to the Championship and will be hoping a previous happy hunting ground will mean they can step back on the podium.

Philipp Oettl (Kawasaki Puccetti Racing) currently sits third in the Championship after a double podium at the Circuito Estoril but has experience of Misano from Moto3™ where he took a best of fourth in 2017 although he still chasing his first WorldSSP victory. He sits just ahead of Luca Bernardi (CM Racing) with the Sammarinese rider getting to enjoy a home round on the world stage; the town of Misano Adriatico is around an hour away from San Marino. Bernardi has been one of the surprises of 2021 so far, including a podium last time out, while he also experienced this circuit in the Italian championship last year, picking up a race win here.

Just behind Bernardi in the Championship standings is Estonian rider Hannes Soomer (Kallio Racing), who has raced at Misano in WorldSSP before with a best result of seventh, Manuel Gonzalez (Yamaha ParkinGo Team) who has stood on the podium at the Italian venue in WorldSSP300 on two occasions, with a best result of second, and heads into the third round of the season on the back of his best-ever WorldSSP result at Estoril, and Raffaele De Rosa (Orelac Racing VerdNatura) with the Italian still searching for his first WorldSSP victory and looking to bounce back after crashing out from the lead at Estoril. De Rosa has stood on the podium at Misano, in 2018, and will be hoping he can repeat that feat and claim his first victory at the Italian venue.

Five One Event riders will also join the Championship at Misano with Armando Pontone (Bike e Motor Racing Team) and teammate Matteo Patacca, Filippo Fuligni (D34G Racing), Davide Stirpe (Extreme Racing Service) and Luca Ottaviani (RM Racing) on the grid, bringing the total number of competitors to 35. All but two of the seven additional riders will ride on Yamaha machinery, with Stirpe on the MV Agusta F3 675 and Ottaviani competing on a Kawasaki ZX-6R.