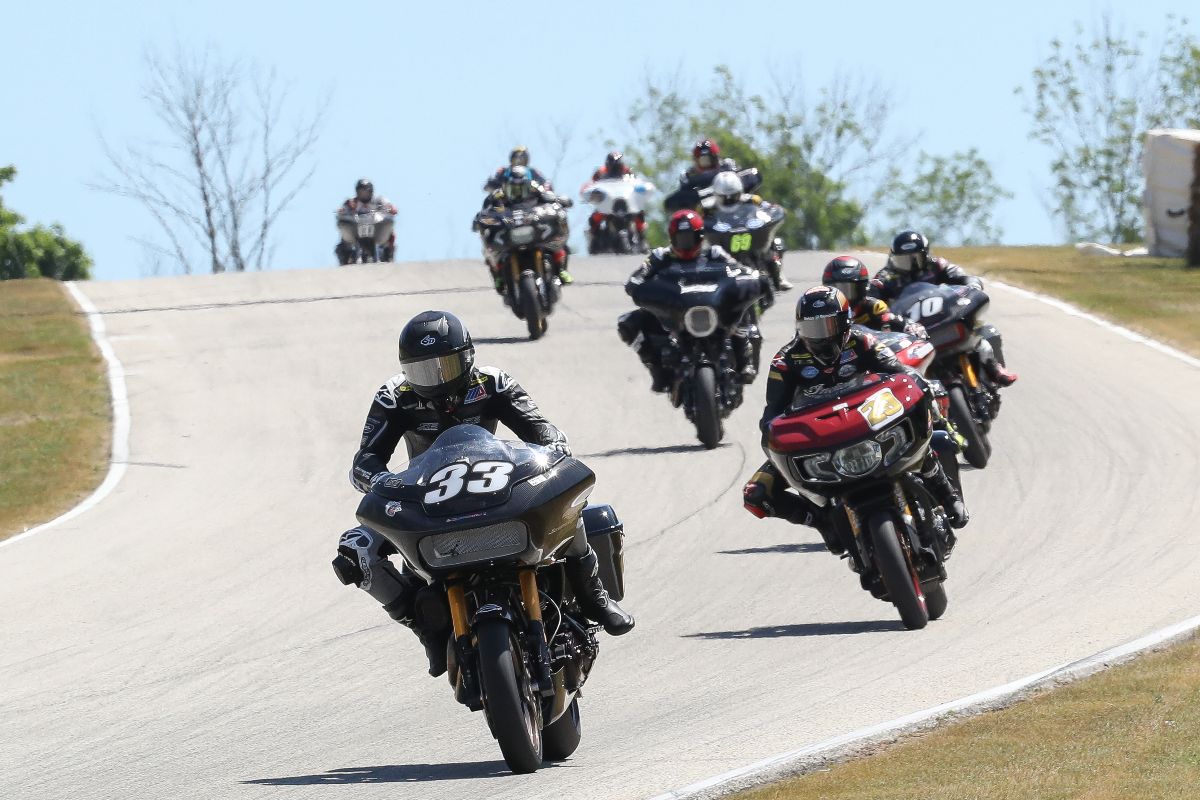 Kyle Wyman was under a tad bit of pressure to give Harley-Davidson its first Mission King Of The Baggers victory at its home race at Road America and he came through in a big way on a sunny Sunday in Wisconsin.

Mission King Of The Baggers: Wyman Gets It Done!

Round two of the 2021 Mission King Of The Baggers Championship took place on Sunday at Road America, and in the home state of Harley-Davidson, the Motor Company swept the podium. Harley-Davidson factory rider Kyle Wyman started from the pole and led every lap of the race all the way to the checkered flag. Indian-mounted O’Hara was in hot pursuit of Wyman for most of the race until he was sidelined with a mechanical issue, which handed second place to Wyman’s brother Travis, who was just announced earlier this week as Kyle’s teammate on the factory team. Third place went to Vance & Hines Harley-Davidson rider Gillim.

Kyle Wyman was obviously ecstatic to get the win.

“It’s amazing,” Wyman said. “We got (Harley-Davidson’s) Bill Davidson congratulating me in victory lane. The who’s-who of the motor company is here. I think they gave away 200 tickets to employees this weekend. There’re people that came out specifically just to watch this race, so to get it done here in Harley’s backyard is just an incredible feeling. Those guys deserve it. They work so hard. Harley has put a pretty large number of people on this project full-time. They were told, look, this is racing. You don’t punch out at 5 o’clock. Those guys are putting in the hours and putting in the extra time, and it’s all paying off. It’s amazing also to have my brother finish second. I don’t know what happened to Tyler (O’Hara). I was trying to just put the pressure on him. I don’t know what happened. Just really glad I could execute and put those first few laps down. I think the third lap of the race for me was my best lap. I think like a 27.4. That was about everything. At that point, I looked back out at the chicane and didn’t say anyone. So, from there I could kind of cruise it home.”

After suffering a somewhat bizarre crash in Supersport race one at Road America on Saturday, HONOS HVMC Racing’s Richie Escalante returned to form in Sunday’s race two and showed why he has the number one on his Kawasaki. With M4 ECSTAR Suzuki’s Sean Dylan Kelly starting from the pole, Escalante overtook Kelly on the opening lap, stretched his lead throughout the 11-lap race, and took the checkers by nearly 10 seconds over second-place finisher and class rival Kelly, who finished second. Third place in race two went to race one winner Stefano Mesa aboard his MESA37Racing Kawasaki.

“Sam (Lochoff) started very good in the first couple corners,” said Escalante. “So, when he have a little bit of a mistake in turn one I said, ‘Okay, it’s time to pass him as fast as possible and then take one perfect lap or almost enough to try.’ Then a very good lap in the first two laps and just consistent. It’s a more fun race than yesterday compared to today, but I’m happy to win again. I’m so happy about that. Thanks to all my team. It’s time to push it for the next races. I think last year, Ridge and Laguna is one of my difficult races where I need to work and be ready for the next race.”

There was one Stock 1000 race on the schedule at Road America, and polesitter Geoff May looked very strong in the early going aboard his Geoff May Racing VisionWheel.com Honda. It’s early days for May with the all-new-for-2021 motorcycle, and as the race went on, the lack of seat time and also time to manipulate the electronics on the bike conspired against him. Altus Motorsports Suzuki rider Jake Lewis overtook May and went on to win his second race of the season. While May held on to finish second, HONOS HVMC Racing’s Corey Alexander raced his Kawasaki to third place.

“We made a lot of changes last night,” Lewis said. “Even last night I was just thinking about how I can improve myself and the bike. This morning, on the way to the truck, I called the team asking to make another few little changes from morning warmup. The start at the beginning before the red flag, I was shuffled really far back. I was like fifth or sixth because I about hit Ashton in turn three. Luckily for that red flag we made another little change that didn’t help for the race that we did after warmup. In the race, the bike was really good. Got a really good start. I knew it was going to be six laps, so it was a sprint race pretty much. Geoff got out front and, luckily, he set sail, because I think that kind of broke up the pack a lot. I thought there was just going to be five or six of us dive-bombing each other on the brakes. I just kept my head down and slowly reeled in Geoff. Then there for two laps I got a really good draft on him and looked at a TV going into turn one because I didn’t know if we split the pack or not and saw Corey. So, I just kept my head down. Honestly, I don’t even know where I passed Geoff. Maybe into five or somewhere. Just hats off to the whole Altus Motorsports team. It’s amazing to be back in the paddock. It’s really nice to be racing with good buddies. It’s been a fun year so far.”

SportbikeTrackGear.com Junior Cup race two featured one of the best battles of the day. In the class where drafting is such a key strategy, the three frontrunners were locked in a heated battle. Scott Powersports KTM rider Tyler Scott was the first of the triumvirate to take his turn in the lead, while Veloce Racing’s Max Toth, and Rodio Racing’s Gus Rodio kept themselves in the mix. The result at the stripe was a photo finish with Rodio nipping Scott by .024 of a second, and Scott beating Toth by .022 of a second. For Rodio, it was his first career MotoAmerica victory and highlighted his comeback from the broken femur that he suffered in a crash at Ridge Motorsports Park in 2020.

Rodio looked to be in a perfect position on the final run up the hill to the checkers, but he didn’t think so.

“To be honest,” he said, “I thought I was in a worse position leading in the last corner, but there was nothing I could do at that point. I wasn’t going to just let everyone pass me. So, I was kind of happy when Tyler (Scott) went past me. It gave me the perfect draft for the line. So, I’m pleased with where I was.”