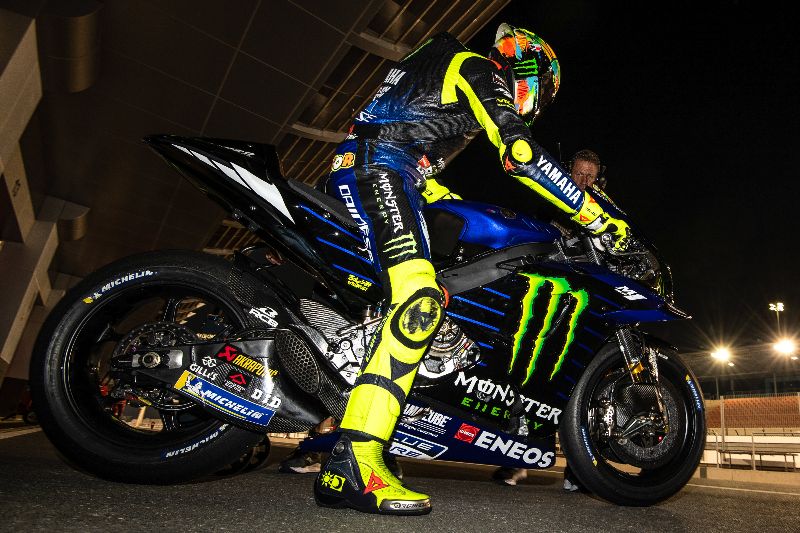 Nine-time World Champion Valentino Rossi will ride his last full season as a Yamaha Factory Racing MotoGP Team rider in 2020. Following discussions together, Yamaha and Rossi have mutually agreed that the personal decision whether the Italian will remain an active rider in the MotoGP World Championship in 2021 will be taken mid-2020.

Grand Prix racing legend Valentino Rossi will complete his astounding 15-year run with the Yamaha Factory Racing MotoGP Team at the end of the 2020 season.

Following discussions between Yamaha and Rossi, the Italian will take until mid-2020 to make the final call whether he will remain an active rider in the MotoGP World Championship in 2021. This time frame was requested by Rossi to evaluate his competitive speed compared to the MotoGP grid only after completing the first seven or eight races of 2020.

Should Rossi decide to continue as a MotoGP rider in 2021, Yamaha assures Rossi of the availability of a Factory-spec YZR-M1 bike and full Yamaha Motor Co., Ltd. engineering support.

Irrespective of the decisions for the future, Yamaha will provide full support and total focus for the 2020 season as Rossi commences his 25th motorcycle Grand Prix racing World Championship, his 21st season in the premier class, and his 15th year with Yamaha.

LIN JARVIS
MANAGING DIRECTOR, YAMAHA MOTOR RACING
The totally understandable decision of Valentino to assess his competitiveness in 2020 before making any decision about 2021 was something that Yamaha respects and also wholeheartedly agrees to. While we have total respect for and confidence in Valentino‘s abilities and speed for the 2020 championship – at the same time Yamaha also have to plan for the future. These days, with six motorcycle manufacturers in the MotoGP class, fast young talents are greatly in demand, and consequently the riders‘ market begins ever earlier. So, it‘s a weird sensation to start a season knowing that Vale will not be in the Factory Team in 2021, but Yamaha will still be there for Valentino, whatever he may decide for the future. If he feels confident and continues to race, we will provide a Factory-spec YZR-M1 bike and full engineering support. If he decides to retire, we will continue and expand our collaborations off track with the young riders‘ training programmes of the Riders Academy and the Yamaha VR46 Master Camp, and with him as a Yamaha brand ambassador. Anyway, that is all speculation – right now we have a full season ahead of us and I can assure the fans that Valentino will have our 100% support every day until he eventually one day decides to hang up his leathers!

VALENTINO ROSSI
YAMAHA FACTORY RACING MOTOGP RIDER
For reasons dictated by the riders‘ market, Yamaha asked me at the beginning of the year to make a decision regarding my future. Consistent with what I said during the last season, I confirmed that I didn’t want to rush any decision and needed more time. Yamaha has acted accordingly and concluded the ongoing negotiations. It is clear that after the last technical changes and with the arrival of my new crew chief, my first goal is to be competitive this year and to continue my career as a MotoGP rider also in 2021. Before doing so, I need to have some answers that only the track and the first few races can give me. I‘m happy that, should I decide to continue, Yamaha is ready to support me in all respects, giving me a factory-spec bike and a factory contract. In the first tests I will do my best to do a good job together with my team and be ready for the start of the season.

With 24 Grand Prix seasons under his belt and still competitive at the age of 40, Valentino Rossi is a living MotoGP legend. He equals Mike Hailwood and Carlo Ubbiali, who both also wrote nine titles to their names in all classes, only Giacomo Agostini and Angel Nieto have more.

The combination of the Yamaha Factory Racing MotoGP Team and Rossi produced four MotoGP World Championships (2004, 2005, 2008, and 2009). His astounding achievements, unparalleled passion for racing, and unrivalled charisma play a huge part in Yamaha‘s and MotoGP‘s heritage, earning the Italian recognition the world over by the epithet “GOAT” (Greatest Of All Time).

RECORDS & HIGHLIGHTS
Rossi is the most successful Yamaha rider in history (56 wins, 46 second places, 39 third places on a Yamaha, scored in 243 races).
He is the rider that’s been active the longest in Grand Prix Racing (he made his debut in 1996, this will be his 25th season, and he has made 402 Grand Prix starts in total, of which 342 were in the premier class).
He competed the most seasons on a Yamaha in the MotoGP class (this will be his 15th season).
He secured the most podiums for Yamaha in the MotoGP class (so far, he has stood on the rostrum with Yamaha 141 times).
He holds the most first places for Yamaha in the MotoGP class (56 wins).
He completed 230 races back-to-back, without missing one (from his debut in 1996 in Malaysia until the race in Mugello in 2010).
He holds the record for most races started overall and in the premier class. (He has started in 402 GP races across all classes; 342 of which have been in the premier class and 243 of those races were ridden on a Yamaha.)
He was the first rider to take back-to-back premier-class victories with different manufacturers (after his win at the 2004 season-opening GP in South Africa).
He scored five successive premier-class victories on a Yamaha (2008: USA, CZE, RSM, INP, JPN).
He achieved the highest number of premier-class victories in a single season by a Yamaha rider (11 wins in 2005).
He finished on the podium at all 16 races in 2003, achieving a perfect 100% podium rate.
He stood on the podium in the premier class on 198 occasions.
He has been on the podium 234 times across all classes, more than any other rider.
He is the only Grand Prix rider that also excels in rally racing. (He is a seven-time winner of the Monza Rally Show and won the GTE Am-class of the 2019 Gulf 12 Hours at the Yas Marina Circuit in Abu Dhabi.)
Out of Yamaha‘s 503 Grand Prix victories, with the 500th achieved in Le Mans 2017, 11% were secured by him, making Rossi the biggest contributing rider (56 victories of the 503 GP wins secured by Yamaha).
He is the most successful premier-class rider in Assen (8 victories) and Brno (5 first places).
He is the only active Grand Prix racer who is also a lower-classes team owner at the same time.
He secured 6,247 points in total, if you combine his results over all the classes he competed in (125cc, 250cc, 500cc, MotoGP).