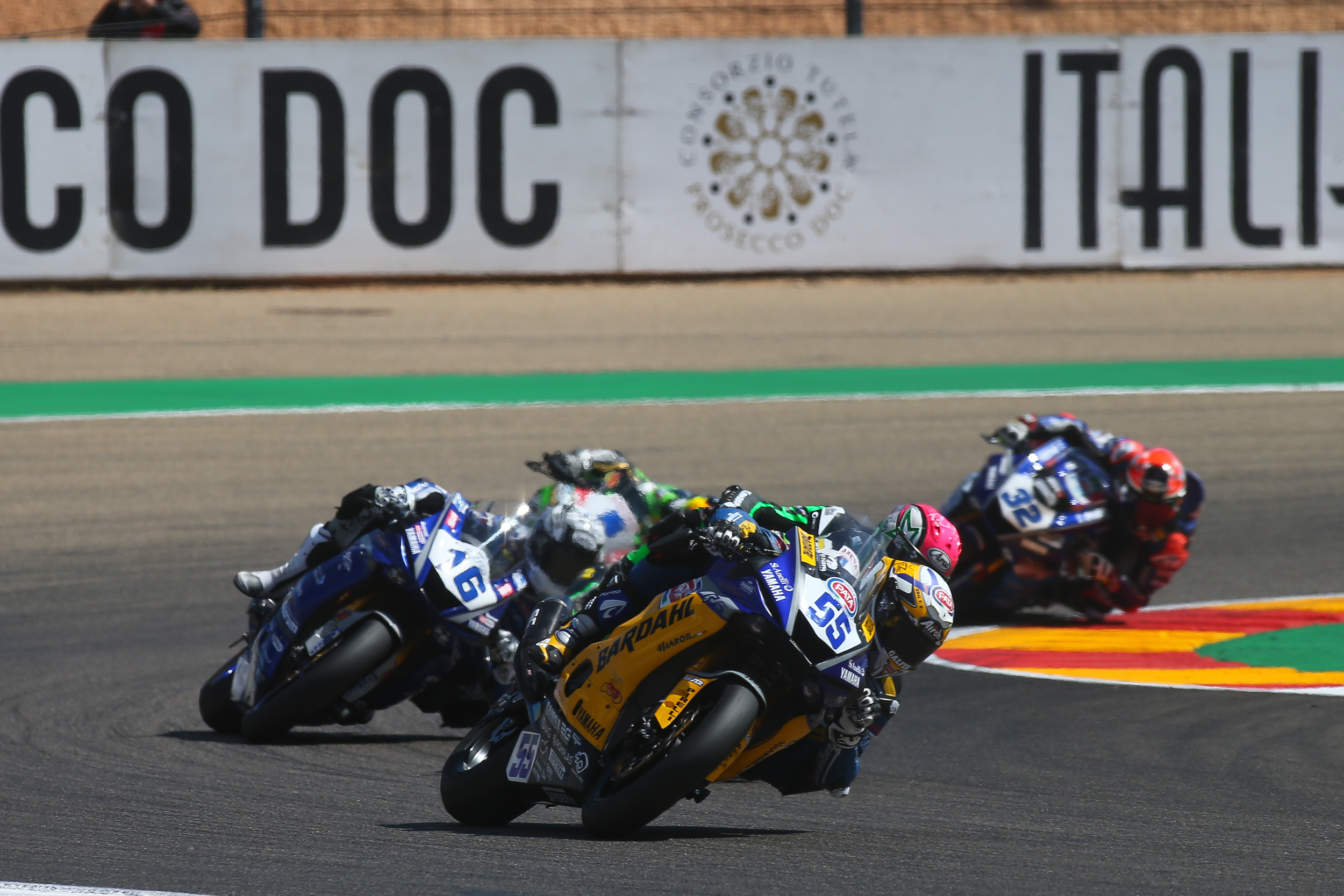 The Japanese manufacturer achieved a sixth consecutive Manufacturers’ title after dominating the 2020 season.

The seventh out of eight rounds of the 2020 WorldSSP season saw Yamaha winning the 2020 Manufacturer’s title. With the strong line up of riders it supports in the category, the Japanese manufacturer has won all the races so far. The Japanese manufacturer has dominated the season claiming 12 victories out of 12, thanks to Andrea Locatelli (BARDAHL Evan Bros. WorldSSP Team) and Andy Verdoïa (bLU cRU WorldSSP by MS Racing). Yamaha has already celebrated the Riders’ Title with Andrea Locatelli in Montmelo, the Italian rider having dominated the season since Phillip Island.

GMT94 Yamaha’s Jules Cluzel, Corentin Perolari and Kyle Smith, as well as Kallio Racing’s Isaac Viñales have also played a crucial role in the Manufacturer’s successes in 2020 as they scored several podium places and highlighted the strengths of the Yamaha YZF R6.

In Phillip Island, the Japanese constructor achieved a full Yamaha podium with Locatelli in first, Cluzel in second and Perolari in third. The Yamaha YZF R6 proves its reliability since round one as Hannes Soomer (Kallio Racing), Steven Odendaal (EAB Ten Kate Racing) and Viñales all finished in the top 10.

As the action restart at the Circuito de Jerez – Ángel Nieto, Yamaha achieved two 1-2 finishes thanks to Locatelli and Cluzel, scoring precious points for the Championship and increasing the gap to its closest competitor. Portimao was another crucial round for the manufacturer as seven riders hit the top 10 in Race 2; with a Yamaha Top four.

Aragon has also been a key round for the brand with Locatelli and Cluzel completing two additional 1-2. The Teruel Round was another brilliant event for Yamaha as three of its riders claimed podium position, whilst Andrea Locatelli became the WorldSSP rider with the most win in a single season.

Andy Verdoïa claimed his first WorldSSP win for Yamaha in the dramatic Race 1 of the Catalunya Round whilst Kyle Smith, who joined the GMT94 Yamaha team as Cluzel’s replacement rider, also made a podium appearance for the manufacturer. Catalan Round Race 2 saw Andrea Locatelli winning his tenth win out of eleven and becoming the 2020 WorldSSP Champion. In Magny-Cours, it was Locatelli who claimed the victory in a wet Race 1. The Japanese manufacturer was able to reach a 102 points advantage over its closest competitor and wrapped the Manufacturer’s title in Magny-Cours.The Italian rider will aim to claim another win in Race 2 of the Pirelli French Round.

Heading into the final Round of the season, they will be looking forward to demonstrating one last time their domination in 2020 during the Pirelli Estoril Round.

Andrea Dosoli, Yamaha Motor Europe Road Racing Project Leader:
“The fourth title in a row for Yamaha is an incredible result, especially when we consider that this has been achieved by four different riders from three teams. On one side, this further confirms the level of performance and reliability of our Yamaha R6 and its GYTR performance products – the YME “Supported Team” programme – and on the other side, the professionalism of our teams and the high level of our riders. Because of them, the Yamaha R6 became the most popular bike on the WorldSSP grid, and therefore I would like to congratulate and thank all the riders, teams and everybody at Yamaha who have been working very hard, we can all be really proud of this achievement. I’d also like to once again congratulate Andrea Locatelli, who maximised the Yamaha R6’s performance at every weekend on his way to the title.”

Fabio Evangelista, BARDAHL Evan Bros. WorldSSP Team Team Principal:
“We are very happy for Yamaha, which undoubtedly deserves to win the constructors’ championship, and we are equally happy to have contributed to the achievement of this goal. Since 2018 the BARDAHL Evan Bros. WorldSSP Team has been a partner of Yamaha, and we can proudly say that we have never had a stop for technical reasons, which is very important. This testifies to Yamaha’s commitment to the category, which has made the house an absolute benchmark.”

Andrea Locatelli, BARDAHL Evan Bros. WorldSSP Team:
“I joined the Yamaha family this year, and looking at our results, things couldn’t have gone better. From the very first tests I had great confidence riding my R6, and this allowed me to be fast on all the tracks. I’m glad that Yamaha won the constructors’ championship, also thanks to my results, it’s an important and deserved success.”

Andy Verdoïa, bLU cRU WorldSSP by MS Racing:
“I am so happy and grateful for the great Yamaha family. For several years, I have been in Yamaha’s bLU cRU young road racing talent platform, but even before I have had the help of Eric de Seynes. This year as a bLU cRU rider, being a debutant in the category, it has been a pride to be able to push the title even though Andrea has done almost everything. But being able to participate in this title means a lot to me, and I hope to continue improving to help Yamaha reach the top in World Championship”

Felix Garrido Rojo, bLU cRU WorldSSP by MS Racing Team Manager:
“Luck does not come to you, is pursued, just like championship titles. The bLU cRU programme seeks to train and improve the skills of promising young riders. This year, participating in the category with two first-time riders empower our enthusiasm and desire to improve and to go hand in hand with Yamaha is a great help. My sincere congratulations to the BARDAHL Evan Bros for their magnificent performance and I am proud to be able to participate with Yamaha and have their support and trust in the World Supersport Championship.”