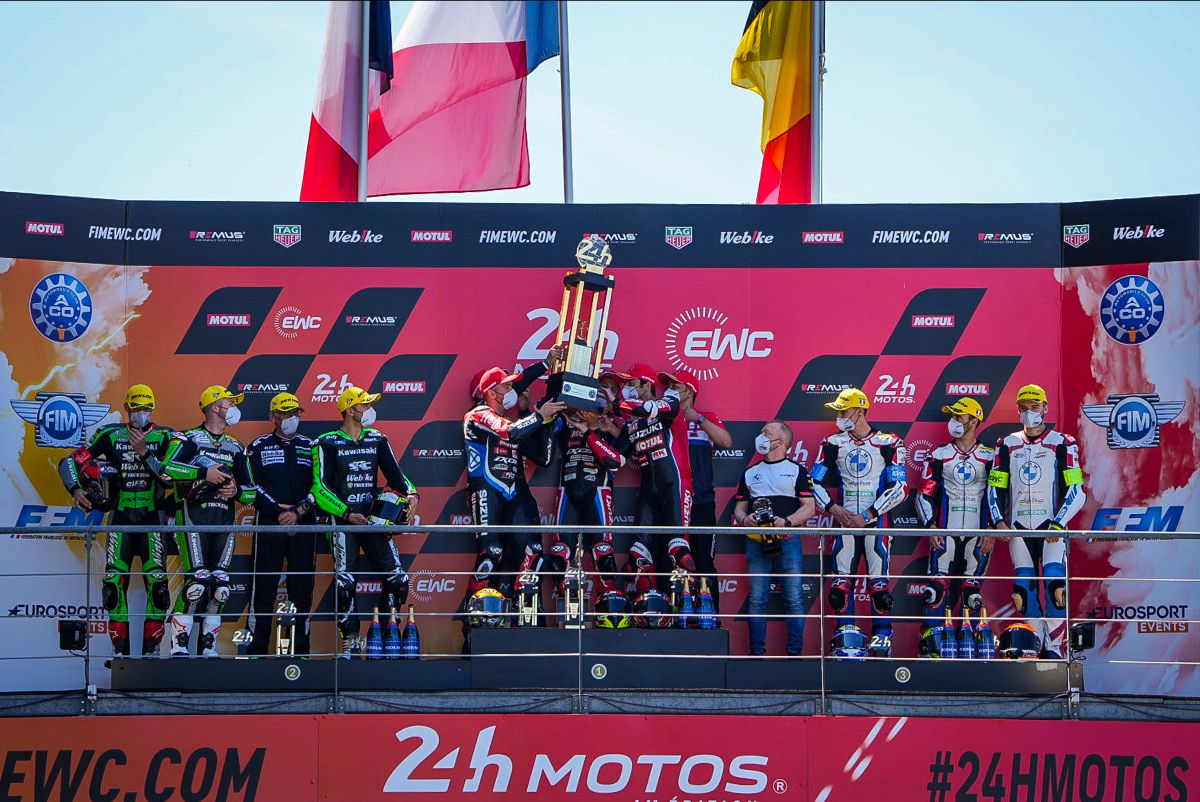 The new Franco-Japanese alliance Yoshimura SERT Motul have clinched a victory in their first outing at the 24 Heures Motos. Suzuki came in ahead of Webike SRC Kawasaki France Trickstar and BMW Motorrad World Endurance Team at Le Mans, the first round of the 2021 FIM EWC. The first Honda and Superstock winner National Motos finished in 5th place.

After 819 laps in the lead out of a total of 855, Yoshimura SERT Motul clinched a superb victory at the 44th edition of the 24 Heures Motos. The factory Suzuki ridden by Gregg Black, Xavier Simeon and Sylvain Guintoli finished 8 laps ahead of Webike SRC Kawasaki France Trickstar’s Jérémy Guarnoni, Erwan Nigon and David Checa, who came roaring back after some issues with their brakes early in the race.

BMW Motorrad World Endurance Team had more of a struggle but finished in 3rd place 13 laps from the leader. After a crash at the beginning of the race, Markus Reiterberger, Ilya Mikhalchik and Javier Forés had to ride flat out to return to the podium.

For Bolliger Team Switzerland, their 4th place finish is as good as a win. The privateer team on Kawasaki has just been taken over by Kevin Bolliger, the son of the founder. They started from 19th on the grid with an all-new rider line-up. Jan Bühn, Jesper Pellijeff and Ondřej Ježek ran a flawless 24-hour race to finish at the foot of the podium.

Very competitive Superstocks
The Superstock teams contributed substantially to the excitement of the 24 Heures Motos with the first Superstock bike finishing 5th. National Motos, the first Honda in the classification and winner of the EWC Dunlop Independent Trophy, won in the Superstock class with riders Stéphane Egéa, Guillaume Antiga and Kevin Trueb. National Motos warded off attacks by BMRT 3D Maxxess Nevers (Anthony Loiseau, Jonathan Hardt and Julien Pilot) and No Limits Motor Team (Luca Scassa, Alexis Masbou and Kevin Calia). Team 33 Louit April Moto, who were still in the leading trio 2 hours from the finish, lost out on a Superstock podium because of overheating due to a damaged radiator. They finished 21st overall and the 12th Superstock.

In 8th place at the finish after a problematic start to the race, VRD Igol Experiences (Florian Alt, Florian Marino and Nico Terol) managed to rack up some important points. After being slowed down by a faulty oil hose joint, the 333 – the first Yamaha in the classification – also suffered a crash and some problems with the shifter.

Despite a crash, ERC Endurance-Ducati gave no quarter. Mathieu Gines, Louis Rossi and Etienne Masson took the Panigale to 9th place, ahead of F.C.C. TSR Honda France. Josh Hook, Yuki Takahashi and Mike di Meglio were in 2nd place overall but an electrical problem followed by a crash in the small hours pushed them back to 10th at the finish.

An exciting season opener
The 44th edition of the 24 Heures Motos – the first race of the 2021 FIM EWC – lived up to its promise to be an exciting, action-packed race. The drama started almost immediately on the Dunlop turn with a crash involving three teams, Wójcik Racing Team, Team 18 Sapeurs-Pompiers CMS Motostore and RAC41 ChromeBurner.

The action taken by Hugo Clère, a rider of the Yamaha 18, to help Sylvain Barrier, stuck underneath the Wojcik bike which had caught fire, won him the Anthony Delhalle EWC Spirit Trophy.
Wójcik Racing Team continued the race with two riders, Balint Kovacs and Artur Wielebski, and finished 30th.

The 12 teams that threw in the towel include LRP Poland with a clutch problem and, among the Superstock challengers, Team 18 Sapeurs-Pompiers CMS Motostore, RAC41 ChromeBurner, Aviobike and Slider Endurance.

The next FIM EWC fixture is the 12 Hours of Estoril, the 2nd race of the season to be held in Portugal on Saturday 17 July.