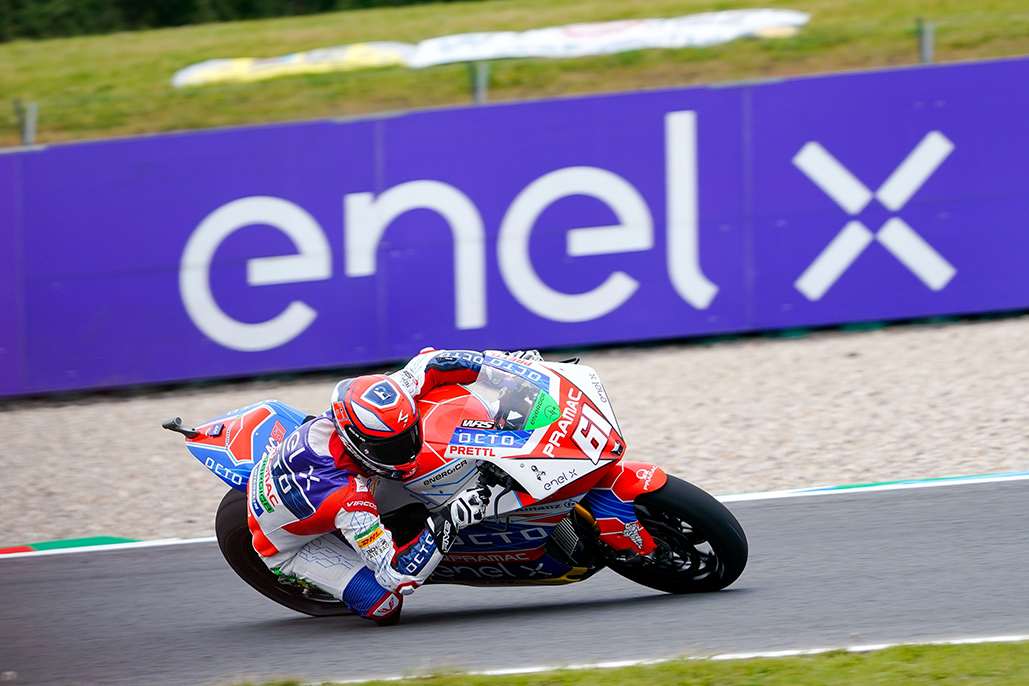 The points leader pulls two tenths clear of Granado at the TT Circuit Assen, with Tulovic completing the top three on Day 1.

Alessandro Zaccone (Octo Pramac MotoE) was the man to beat on Day 1 of the FIM Enel MotoE™ World Cup’s first visit to the TT Circuit Assen, the points leader making it a clean sweep as he topped FP1 and FP2 to end the day two tenths clear of Eric Granado (ONE Energy Racing) on the combined timesheets. The Brazilian was also consistently fast, second in the morning and afternoon, with Lukas Tulovic (Tech3 E-Racing) moving up in FP2 to complete the top three overall.

FP1
Zaccone started the day by gaining the upper hand on Granado by just 0.083, the two rising to the top by the end of FP1. It was the first time the Italian has been top in a Free Practice session; a feat he repeated in the afternoon to make it a slightly ominous day for the rest. Dominique Aegerter (Dynavolt Intact GP) was third fastest, another less-than-a-tenth separating the Swiss rider from the Brazilian as the Cathedral promised close and delivered early.

Reigning Cup winner Jordi Torres (Pons Racing 40) was fourth, 0.047 off Aegerter, with rookie Hikari Okubo (Avant Ajo MotoE) locking out the top five. The Japanese rider says Assen is one of his favourite tracks, and he started the weekend impressing.

There was one crash as Andrea Mantovani (Indonesian E-Racing Gresini MotoE) went down, rider ok.

FP2
Despite rain for the Grand Prix classes, track conditions had improved enough by MotoE™ FP2 to allow the field to put on slicks and improve too, and that Zaccone did. A 1:42.809 made the Italian the only man under the 1:43 barrier, with a 0.239 gap back to Granado as the Brazilian also continued to make a habit of going fast.

After ending FP1 in sixth, Tulovic moved up to third overall with his FP2 lap, another couple of tenths in arrears but with a sizeable gap in hand as the top three pulled clear of the rest by just over four tenths.

Mantovani crashed in FP2, rider ok, as did and was home hero Jasper Iwema (Pons Racing 40).

Combined timesheets
Zaccone leads Granado leads Tulovic, with 0.411 the gap back to Hikari Okubo in fourth. The Japanese rider has closer company from Dominique Aegerter 0.075 further back, with Jordi Torres less than a tenth off the Swiss rider to end the day in sixth.