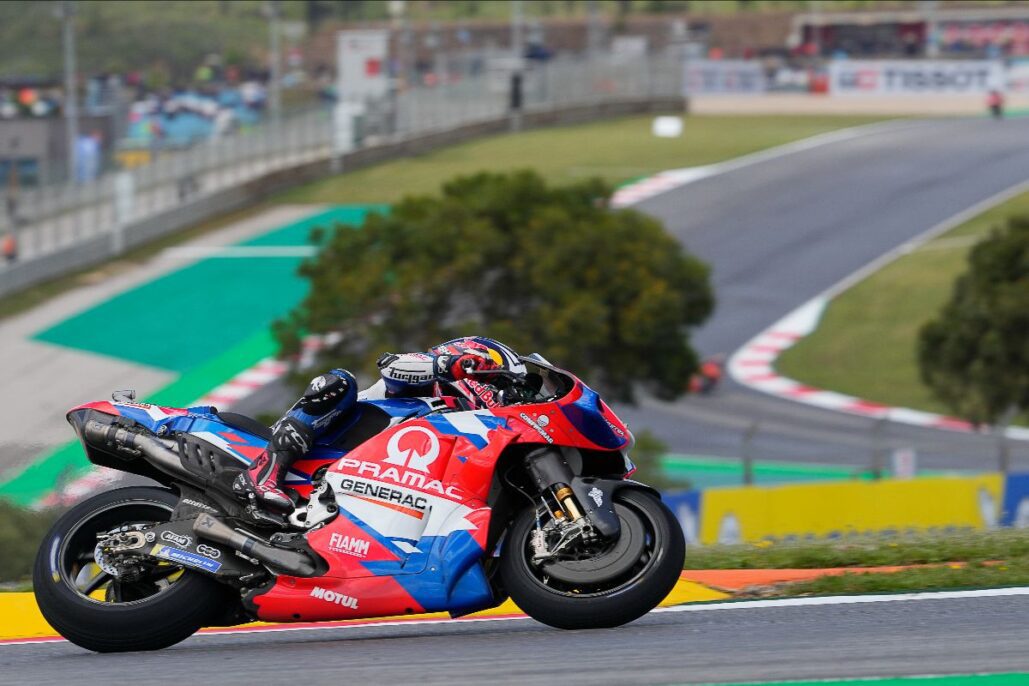 Slick tyres, a drying track, last minute flying laps and some big names well down the order: Saturday served up a storm.

With great risk often comes great reward is an adage all 12 MotoGP™ riders in Q2 were following as they tackled a patchy Algarve International Circuit with slick tyres. In a thrilling final 30 seconds that saw four riders provisionally sitting at the top of the pile, pole position, in the end, went the way of the final man to cross the line: experienced Frenchman Johann Zarco. The Pramac Racing rider denied Team Suzuki Ecstar’s Joan Mir a debut MotoGP™ pole, with Aleix Espargaro (Aprilia Racing) then sneaked his way onto the front row just seconds after.

Q1
Q1 was was pure drama as the premier class riders rolled the dice with slick tyres on a partly-damp circuit. LCR Castrol Honda’s Alex Marquez was and Mooney VR46 Team’s Luca Marini timed their attacks perfectly to end the session first and second, booking their places in Q2 in some style. Jorge Martin (Pramac Racing), meanwhile, was the first to lost out – and the Spaniard lost his front row streak, now to start P13.

The headline stealers, though, were crashes for Ducati Lenovo Team’s Francesco Bagnaia and Gresini Racing’s Enea Bastianini as they both were caught out by damp patches. Bagnaia, who headed to hospital for precautionary checks after the crash, will line-up in last place, and Championship leader Bastianini, the number 23 quickly given the ok, finds himself down in P18.

The man just behind him in the standings, Team Suzuki Ecstar’s Alex Rins, lines up second to last after a topsy turvy and fascinating session in Portugal.

Q2
It was no surprise that the early pacesetting was done by the Q1 graduates Alex Marquez and Marini, as the pair put their knowledge of the conditions to brilliant use, the number especially seeming on rails. But as the other ten riders got up to speed and the track dried out further, the pace began to heat up. There were three minutes left when Zarco hit the top for the first time, but he was displaced just 30 seconds later by Mir.

With the clock now ticking down to just 90 seconds and the final flying laps lined up, Ducati Lenovo Team’s Jack Miller joined the party. The conditions were perfect for the Australian as he eyed a first pole position since Argentina 2018 in a similar situation, but then another rider who these conditions usually suit went red through the first sector.

Repsol Honda’s Marc Marquez was flying and on course to take provisional pole at the most opportune moment, before his teammate Pol Espargaro went down at the final corner, rider ok but bringing out the yellow flags. Marquez went fastest, with World Champion Fabio Quartararo (Monster Energy Yamaha MotoGP™) going second, but both laps were swiftly cancelled due to Espargaro’s off. And there was no time left.

That meant Miller still held pole but he was usurped, with the chequered flag now out, by Mir. The yellow flags were gone at the final corner and the 2020 World Champion capitalised, taking over on top. But his dreams of a career-first premier class pole were dashed within seconds as Zarco’s final flying lap of a 1:42.003 proving good enough to pip the number 36 to the top. Still, second place remains Mir’s best-ever result in a MotoGP™ qualifying session.

The Grid
Despite sitting pretty at the top of the timesheets with the chequered flag out, Miller didn’t even manage to hold on to a front row spot with Aleix Espargaro sneaking third whilst all eyes were on Zarco’s charge for pole. The Australian will be joined on row two of the grid by reigning World Champion Fabio Quartararo, who recovered well from an early scare on a damp patch, and rookie Bezzecchi, who put a big smile on the face of his trackside team owner Valentino Rossi.

Despite doing the early running, Alex Marquez and Marini eventually slipped back to seventh and eighth, although for the former, despite already being a premier class podium finisher, it’s his best MotoGP™ qualifying result.

Marc Marquez, meanwhile, will feel he deserved more than ninth after that late lap cancellation, and he’s just ahead of teammate Pol Espargaro, whose last corner crash saw him end up tenth. It was a slightly underwhelming Saturday for Miguel Oliveira and Brad Binder (Red Bull KTM Factory Racing), and the duo will be looking for more on Sunday after seeming competitive all weekend.

If the sun shines on Sunday then it truly is anyone’s guess who will take the glory, with so little dry track time so far. The only thing that is guaranteed is another stunning race, so don’t miss lights out for Round 5 of the MotoGP™ World Championship at 13:00 local time (GMT+1)!

Johann Zarco: “I am pretty happy. I didn’t expect something as good as this. It was tricky this afternoon with patches on the track. In FP4 it was clearly wet tyres but I was starting to wonder. I was pretty happy to go straight to Q2 because we saw in Q1 that the choice was difficult. They only got the slick working in the last minute, which is tough for the nerves. I could analyse Q1 well and then for Q2 the best strategy was to stay out with the same tyres and try to gain confidence. On the last lap, it then worked well for me.”