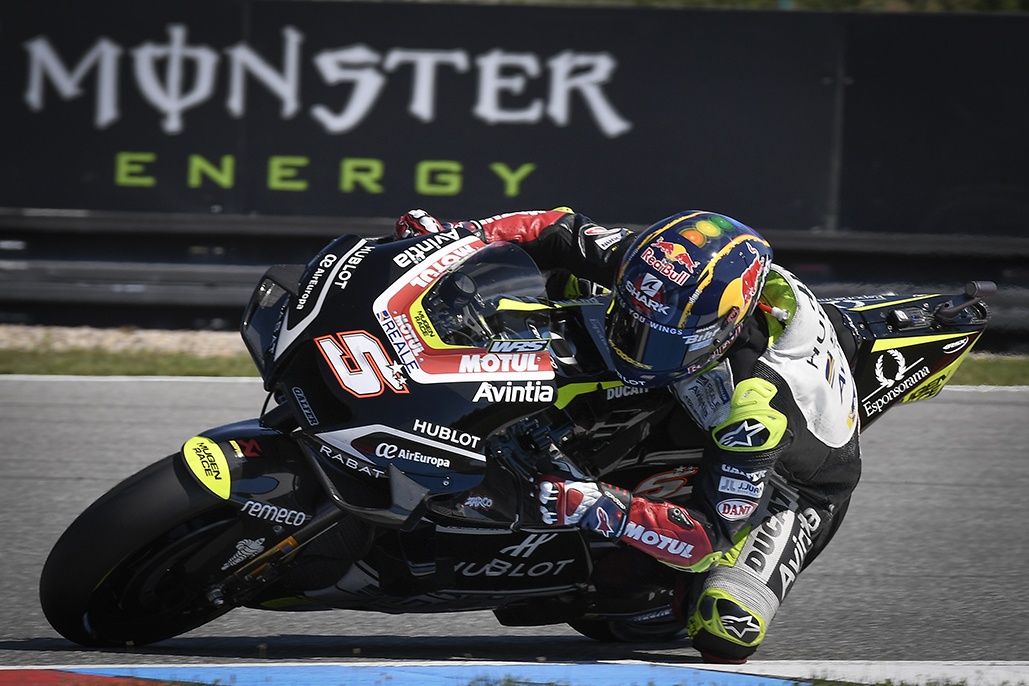 Zarco shines, Quartararo crashes and Dovizioso suffers his worst ever premier class qualifying on a dramatic Saturday in Brno.

Many expected Brno may bring a shake up, but few could have expected the stunning and unpredictable qualifying sessions at the Monster Energy Grand Prix České republiky. It’s Johann Zarco (Esponsorama Racing) who will start from pole as the Frenchman pulled an incredible three tenths clear in Q2, with Fabio Quartararo (Petronas Yamaha SRT) crashing out on his final lap and forced to settle for second. Franco Morbidelli (Petronas Yamaha SRT) completes the front row just eight thousandths off his teammate, with some serious headlines further down the field too…

2018 winner and last year’s second place finisher, Andrea Dovizioso (Ducati Team) starts 18th after his worst ever premier class qualifying. KTM are the only factory team with both riders on the first three rows. Repsol Honda are the two last bikes on the grid with Stefan Bradl and Alex Marquez. Jack Miller (Pramac Racing) didn’t make it out of Q1. Aleix Espargaro (Aprilia Racing Team Gresini) makes it another Independent Team 1-2-3-4, as it was on Friday, as he equalled Aprilia’s best qualifying in MotoGP™…

It began in Q1 as we saw a host of big names from the front in Jerez fighting it out to even move through, setting the scene for the next shake up of the day. There was some late drama on the timing screens too as on the last lap for many, it looked like it would be a one shot wonder from Alex Rins (Team Suzuki Ecstar) sending him through first, to be closely followed by Takaaki Nakagami (LCR Honda Idemitsu)… but then the Japanese rider’s lap disappeared. Cancelled for exceeding track limits at Turn 12, that left him out the graduation zone and boosted Brad Binder (Red Bull KTM Factory Racing) into second. No one could better the South African’s effort, and he moved through alongside Rins. Leaving Dovizioso, Miller, Nakagami and Friday’s third fastest man, Miguel Oliveira (Red Bull KTM Tech 3), out the fight for the top 12.

Come Q2, it was was Maverick Viñales (Monster Energy Yamaha MotoGP) who crossed the line first with a 1:56.6, with teammate Valentino Rossi pretty much matching the Spaniard’s time to slot into P2, pipping Morbidelli. Red Bull KTM Factory Racing’s Pol Espargaro then blitzed the lot of them to go provisional P1 with a 1:56.1 as the Austrian factory continued to shine, but the KTM wouldn’t stay at the summit long as Quartararo hit next to set the first 1:55 of the weekend – a 1:55.990. He didn’t know it at the time, but that would remain his quickest effort.

Aleix Espargaro was giving the Championship leader some attention too, and the Spaniard had Quartararo a couple of bike lengths ahead, made the most of it and improved despite the Frenchman not quite managing to do so. Viñales then took a provisional front row before Rins went P6 on his opening fast lap, but a gaggle of riders were all setting red first sector times just ahead of the Suzuki. Morbidelli, Rossi, Binder and Zarco were all in close proximity, with the latter going faster than everyone. Halfway round, Morbidelli – spearheading the group – was under his teammates’ time by two tenths, but it was the Frenchman at the back of the group who had a stunning three tenths in his pocket. Would he hold onto it?

He would. Zarco flew to the top of the pile for an incredible provisional pole position, with Pol Espargaro going P2 with a stunning lap for the Spaniard as well. The number 44’s joy was shorter lived, however, as the KTM rider had set it when passing yellow flags for a crash for Cal Crutchlow (LCR Honda Castrol) at Turn 9. There was one man left to try and overcome Zarco’s incredible laptime, with Quartararo the last man over the line for his final push and only seconds to spare.

The number 20 was on a personal best lap but still down on Zarco by over a tenth half way round, needing to find something in the final quarter of the lap. He pushed and kept pushing but this time too far, sliding into the gravel at Turn 13 and kissing goodbye to a fifth pole in a row – rider ok and Zarco left to his stunning pole position for the Czech GP.

‘El Diablo’ is still starting second ahead of Morbidelli, with Aleix Espargaro heading up Row 2. Maverick Viñales is fifth and the first factory rider on the grid, with Pol Espargaro taking P6 and a second row start despite the heartbreak of seeing his earlier, faster lap cancelled.

Brad Binder impressed as ever with a P7 in Q2, the South African ensuring KTM are the only factory with both factory team riders on the first three rows. The rookie is joined on that third row by Danilo Petrucci (Ducati Team), a direct entrant to Q2, and a quiet but solid day’s work from Team Suzuki Ecstar’s Joan Mir in P9.

Rossi completes the top ten and lost out to Mir by only 0.003, although ‘The Doctor’ got the better of Alex Rins by half a tenth as the number 42 Suzuki took eleventh. Crutchlow, despite his heroics to move through on Saturday, was left in P12 after his crash. Oliveira, Miller and Rabat complete the fastest fifteen.

That’s it from a shaken, stirred and stunning Saturday of action at Brno. Can Dovizioso and Miller make their way through the field? What can Zarco do on Sunday? Will Quartararo make it three-in-a-row? With less race day drama, what can KTM achieve? And who has the race pace to go the distance? Find out on Sunday at 14:00 (GMT +2) as the premier class go racing at the Automotodrom Brno.

Johann Zarco: “I still cannot believe that I’m on pole and I did it, it’s just fantastic. I was feeling good on Friday and Saturday on the new tyre, I was able to do a pretty fast first lap and that was already positive to go straight to Q2. Because I’m on the way back, learning many things. I need to improve because the others improved a lot in the last two years. But in qualifying, on the first tyre I wasn’t that fast and I was a bit worried because it was warm, sliding more than the morning, but I was keeping calm. I was following a group in front of me and that way I could control my lap. And then I w s surprised at this super good laptime. So let’s take the good from now and see tomorrow with a good start if we can stay with the top guys at the beginning, this will be really important to have a good race.”