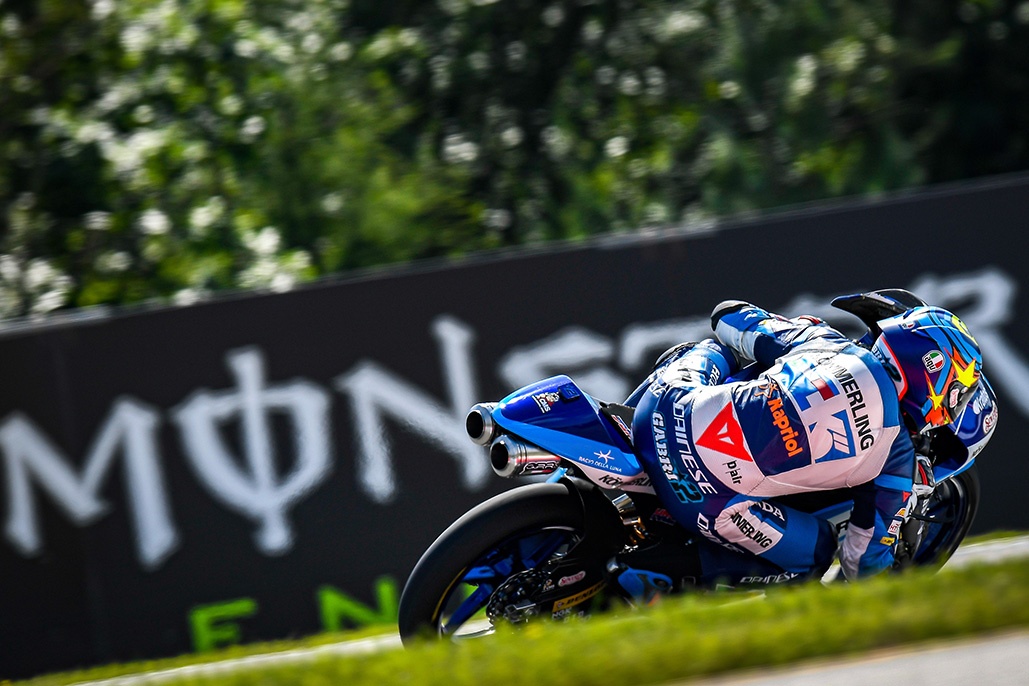 The Argentinean sets the pace in practice, ahead of Toba and Fernandez.

Gabriel Rodrigo (Kömmerling Gresini Moto3) has topped the practice timesheets once again in the Moto3™ World Championship, ending Friday at the Monster Energy Grand Prix České republiky in P1 by virtue of his fastest laptime in FP1. Under the summer sun in Czechia, most of those currently set to go straight into Q2 set their quickest efforts in the morning, including Red Bull KTM Ajo duo Kaito Toba and Raul Fernandez as they completed the top three overall.

FP1
Rodrigo was quickest but left it late to topple Toba, with the Japanese rider having spent much of the session at the top. Ultimately Rodrigo rounded out the the session just over a tenth ahead after a late push, with the second Red Bull KTM Ajo of Toba’s teammate Raul Fernandez ending FP1 third fastest and a further 0.121 in arrears.

Dennis Foggia (Leopard Racing) had a good first session as he took P4, only 0.060 off Fernandez, before a big gap separated the fastest four from the rest. Ayumu Sasaki (Red Bull KTM Tech 3) was half a second off Foggia in fith, with the rest of the top ten split by almost nothing, including the likes of Albert Arenas (Gaviota Aspar Team Moto3) and key challenger John McPhee (Petronas Sprinta Racing).

There were a number of crashes in FP1, all riders ok. Tatsuki Suzuki (SIC58 Squadra Corse) went down at Turn 13, before Jaume Masia (Leopard Racing) had one crash at Turn 11 and then another at Turn 3. Jason Dupasquier (CarXpert PruestelGP) crashed at Turn 7, with Celestino Vietti (Sky Racing Team VR46) retiring at almost the same time and place after running out of fuel. Sergio Garcia (Estrella Galicia 0,0) also some a little drama as he moved off the racing line on the main straight with an issue, pulling in at the end of pitlane.

FP2
As the temperatures rose, the laptimes slowed slightly but it was Fernandez back at the sharp end as he was fastest in FP2. The afternoon’s second quickest lap came courtesy of Masia after a sterling effort to bounce back from his two FP1 crashes, and his 2:09.364 makes him one of few to improve overall. The top five in FP2 was completed by Romano Fenati (Sterilgarda Max Racing Team), McPhee and Garcia.

Carlos Tatay (Reale Avintia Racing) was the first to crash in FP2 as he took a tumble at Turn 7, and he’s gone for a check up at local hospital. Ayumu Sasaki then went down at Turn 10, before the same corner also caught out his compatriot Kaito Toba a few minutes later, although the number 27 was able to get back on track. Alonso Lopez (Sterilgarda Max Racing Team) slid out at Turn 5, Vietti at Turn 4 and, finally, Darryn Binder (CIP – Green Power) at Turn 13. All riders ok, Tatay pending his check up.

By the end of the day, Rodrigo leads the way ahead of Toba, Fernandez and Foggia as the fastest four come from FP1, with Masia completing the top five to shuffle Sasaki down to sixth. Tony Arbolino (Rivacold Snipers Team) is P7 ahead of Arenas, with McPhee taking ninth. Fenati completes the top ten for Husqvarna.

Riccardo Rossi (BOE Skull Rider Facile Energy) took an impressive P11 ahead of an equally impressive Dupasquier, with Sergio Garcia next up as the second rider – alongside Masia – to improve in FP2. Ai Ogura (Honda Team Asia) currently stands to be the last man moving through to Q2, but everything can get another shake up on Saturday ahead of qualifying.

How will FP3 change the game? The likes of Suzuki, currently down in P16 overall, will be pushing hard from 9:00 (GMT +2), before qualifying decides the grid from 12:35.