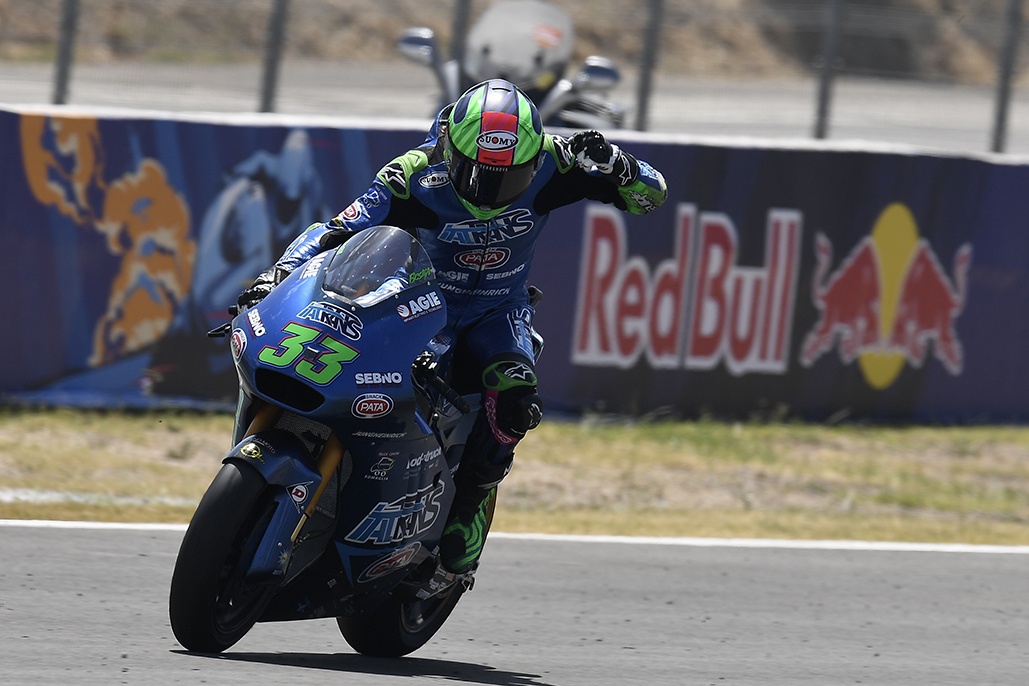 Any of the top seven in the Championship on the way into Brno could leave Czechia in the lead. But the Italians appear to be coming…

Three races, three winners is the simplest way to write the story of Moto2™ so far in 2020. It was Tetsuta Nagashima (Red Bull KTM Ajo) taking the lead in Qatar before he had to settle for understudy in Round 2, with Luca Marini (Sky Racing Team VR46) bouncing back to take the second victory of the season. Then it got even closer, with a crash during the Andalucia GP seeming to put the Japanese rider on the back foot – and a new winner emerging onto the top step, for the first time in the intermediate class no less. The new kid on the victory block was Enea Bastianini (Italtrans Racing Team), and it means we head into Brno with only five points separating the top three. 50, 48, 45 – Nagashima, Bastianini, Marini. With another 75 in play in the next three weekends.

Last year, Bastianini was third and took his first podium in Moto2™ in Czechia. That bodes well for him. Marini was fifth, however, and took a podium in 2018, which also bodes well… and Nagashima was ninth last season, which was a solid finish for him at the time. But do past results even give us a clue anymore in a new-look 2020, with Triumph bedded in as official engine supplier and so many on a new roll of form?

MB Conveyors Speed Up’s pairing of Jorge Navarro and Fabio Di Giannantonio will be hoping so. The Spaniard has had an uncharacteristically up and down start to this season and he was only just off the podium last year, and ‘Diggia’ was on it for the first time in Moto2™. Tom Lüthi (Liqui Moly Intact GP) will hope track records count for something too, as the Swiss veteran is the man in the field to have previously won a Moto2™ race at the track. Both he and teammate Marcel Schrötter will be hoping for more, having both had a tougher start to 2020 than many expected. Speed has been there, but Sundays have sometimes been an uphill battle and turning it around now would really shake things up.

Aron Canet (Openbank Aspar Team Moto2), however, is also Grand Prix winner at the circuit, only he did it in Moto3™. The Moto2™ rookie has been one of the standout performers of the season so far, quietly – or maybe not so quietly – racking up the points and impressive finishes. Canet is fourth overall in the standings after his first three intermediate class races, which is a record to write home about in itself, but surely a first podium is only a matter of time? Add to that Speed Up’s successes last season in Czechia…

It won’t be easy to make that leap, however. Sam Lowes (EG 0,0 Marc VDS), having missed Qatar through injury, was back on it in Jerez and took two fourth places. Marco Bezzecchi (Sky Racing Team VR46) unleashed his pace into points despite injury, Jorge Martin (Red Bull KTM Ajo) has been on pole and the podium, Lorenzo Baldassarri (Flexbox HP 40) is still very much in that mix in the standings… and what about Joe Roberts (Tennor American Racing)? The American was a star of the show in Qatar before having a tougher time of it in Andalucia, but his best finish before Losail this year was a tenth in Brno. In the rain, but on his Moto2™ debut. And it’s a track he’s loved since racing in the Red Bull MotoGP Rookies Cup…

Another weekend, another track, and another 25 points on the table. Any one of seven could leave Czechia on top of the pile, but the momentum certainly seems to be dancing to the beat of Il Canto degli Italiani for the moment. Can Nagashima strike back? Or are we to enjoy a fourth different winner in the fourth race of the season? Find out on Sunday the 9th of August at 12:20 (GMT +2) local time.