A second perfectly judged victory from Deniz Öncü completed the twelfth season of the Red Bull MotoGP Rookies Cup after an incredible and typical 15 rider battle around Motorland Aragón. The 15-year-old Turk had to use every gram of his quickly accumulating skills to fend off Carlos Tatay, Ryusei Yamanaka and the rest.

A single second covered the first seven at the line and there were at least that many leaders through the 15 laps. “It was another great race and I am so happy to win it and have second in the Cup behind my brother,” enthused Deniz Öncü.

“It was hot and we were fighting all the way. I tried to get away but it was crazy overtaking all the time,” continued Öncü. “The Spanish tried to block me but I just thought; that’s OK I am Turkish I will win.” It was a very happy young man who sang along with his national anthem on the podium.

Tatay also doubles
Spanish 15-year-old Tatay was almost as pleased with second, having been third on Saturday. “I was thinking, thinking about the last lap and where I had to be. I really worked at it from when I saw three laps to go on my board. I managed to put myself second coming down the back straight on the last lap and tried to slipstream past Deniz but couldn’t do it.”

“It’s been a great season, I learnt so much,” explained Tatay who was second and first on the KTM RC 250 R in the opening races of the season in Jerez. “I already can’t wait for next year.”

Yamanaka not thrilled
For Yamanaka, the 16-year-old Japanese, third was less than perfect. “I wanted to win, I did everything possible. It was a very hard race, everyone was pushing so hard in the last race, very hard riding, very hard overtaking. Then there was a crash going onto the back straight on the last lap and I just wasn’t in the right place to try and win.”

That last lap crash was Adrián Carrasco. “Xavi (Artigas) came inside me and I was a bit wide,” explained the 16-year-old Spaniard who was unhurt. “Trying to get on the gas hard for the last straight but the tyre had nothing left.”

All quick
Yuki Kunii was a fine fourth, the 15-year-old Japanese backing up his sixth from Saturday. “I got a good start from 15th and I worked hard. Mid race I was fourth or fifth but it was hard to get further forward. I could not overtake Deniz who was in front and someone else then passed me and I got pushed back to seventh or eighth so I had to work my way forward again. I tried to pass Yamanaka at the end but the tyre was sliding a lot and I couldn’t.” 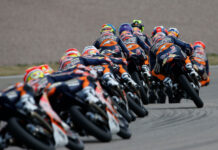 Sachsenring is half way to Rookies Cup glory 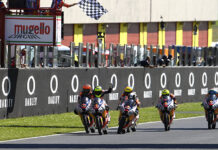 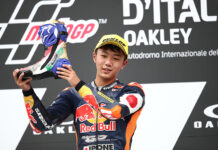