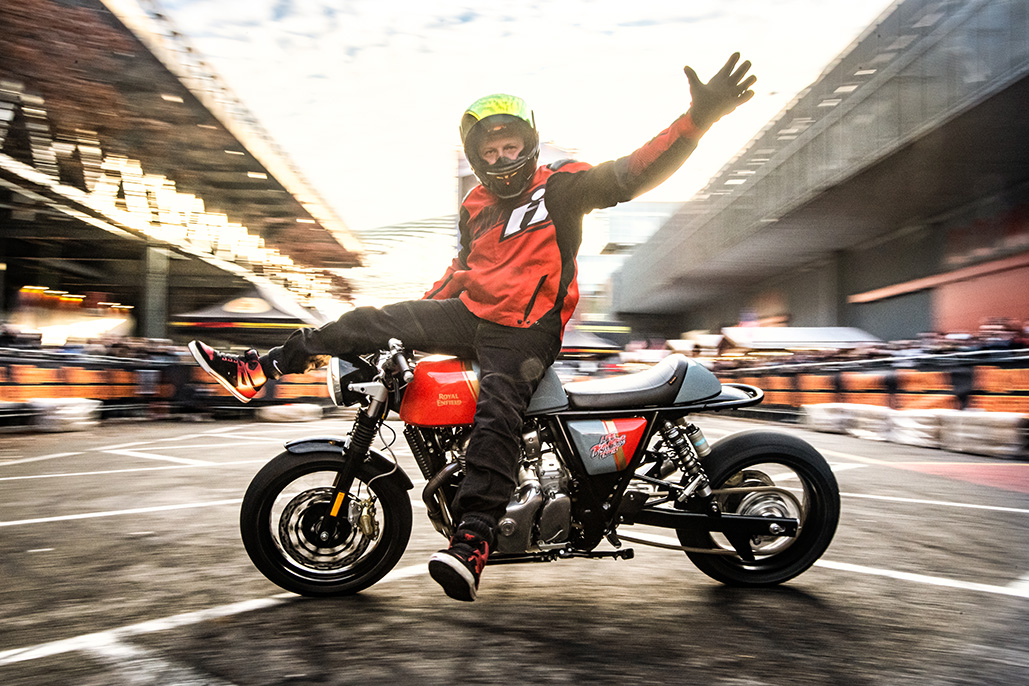 Royal Enfield and world-renowned professional stunt rider Lee Bowers announce their exciting new partnership for 2022 and beyond, bringing yet another new dimension to Royal Enfield’s ever growing community of partners and unique experiences – all in celebration of the brand’s “Pure Motorcycling” ethos.

Having been stunt riding professionally for over 15 years – including working with some of the most iconic franchises on TV and the big screen (Top Gear, James Bond, Mission Impossible and Kingsman) as well as holding multiple Guinness world records, and countless UK & European Freestyle championship titles – Lee Bowers has forged a reputation as one of the biggest and more respected names in the elite stunting industry. Having performed live shows worldwide, Lee has historically made his name performing on high capacity Japanese sports bikes. However, the shift over to Royal Enfield, and onto smaller capacity Twin and single cylinder engines, marks an exciting and unchartered new chapter; bringing with it a host of different developmental opportunities and pushing the boundaries of stunt performing.

Working in close collaboration and consultation with Lee Bowers; the in-house custom team at Royal Enfield’s UK Technology Centre and at the legendary team at Harris Performance developed an incredible fleet of one-of-a-kind custom stunt bikes to allow Lee to take his much loved stunt shows to all new levels of performance and creativity.

Says Lee Bowers, “The team at Royal Enfield proposed a challenge I simply couldn’t resist – to collectively design and build a stunt bike the likes of which had never been seen before! Royal Enfield brings prestige and unrivaled British heritage to the project –

along with the most important aspect – an awesome selection of base bikes. Harris Performance (with whom I’ve had a fantastic working relationship with since 2007) offers a wealth of expert fabrication knowledge and I have my unique experience in specialist stunt skills – I knew instantly that this would be an amazing collaboration!”

The specially developed stunt show fleet includes three unique motorcycles – all of which have been designed and built specifically for different stunting capabilities and showcase a wide range of engineering and performance customisations never before seen on any Royal Enfield.

The showpiece of the fleet is the Freestyle Stunt Bike – taking the Interceptor 650 as the donor motorcycle Harris Performance set to work from the ground-up (however, critically maintaining the integrity of the 650cc Twin engine) to turn the Interceptor 650 into an extraordinary stunting machine capable of performing Lee’s most technically and physically demanding tricks.

The second motorcycle in the stunt fleet took the Continental GT as the base and then was turned into a specialised Drift Bike – designed for high speed stunting and sideways drifting. The intention with the Drift Bike was to keep as many of the stock specification parts on the Continental GT as possible (again including the 650cc Twin engine) in order to retain as much of the aesthetic integrity of the base model as possible – however Harris Performance made certain modifications as suggested by Lee to maximise the ergonomics of the machine and increase its stunting capabilities; including a customised reinforced fuel tank, a Harris bespoke rear brake carrier and chain adjustment system, S&S race 2 into 1 exhaust system, Harris bespoke crash cages, a wider Maxxis 180 rear wheel, RSC easy pull clutch, Renthal 520 sprockets and a Harris bespoke aluminium swingarm extended 200mm over stock length.

To complete the stunt fleet, the final customised motorcycle took the Himalayan as the base model – an altogether new and exciting challenge for Lee to perform world-class stunt tricks on a 411cc single engine. The intention with the Himalayan Fire Bike was to bring some additional fireworks to the stunt shows – so what better a way to do this than with a fully rigged professional pyrotechnic set up; including a side mounted flame-thrower as well as fireworks and a smoke machine mounted on the front pannier racks.

Says Lee Bowers, “I’ve always looked to embrace new challenges and push my creativity in new directions. Having stunted professionally for so many years, I know it’s possible for me to stunt ride any high performance bike with some dedication and practice; however to break new grounds with such an iconic brand as Royal Enfield that has traditionally been associated with smaller capacity retro classics and singles is incredibly exciting both personally and professionally.

I feel honoured to get the opportunity to work closely alongside Harris Performance and Royal Enfield; it’s a great journey we’re starting together and I know we can build something incredibly special. This new partnership will open many many doors for us all and for that I’m really excited – taking this incredible fleet of machines right around the world will hopefully show what Royal Enfield motorcycles are capable of to all new audiences!”

Says Adrian Sellers, Head, Royal Enfield Custom Program “Royal Enfield has a very strong custom culture – this is something that we’re really proud of and as a brand we’re constantly looking to develop further. When we talk about customization, we aren’t just talking about aesthetics, but also of pushing the function of our motorcycles to the limit. The DTRA Championship winning Twins FT flat track racer is a beautiful example of this, and in fact it was this very motorcycle that Lee saw while visiting Harris Performance and instigated the first conversation about making a ground up stunt bike from a Royal Enfield Twin 650.

These stunt bikes are another chapter in this story, and a challenge we have relished taking up. We’re delighted with the way they have come out, blending functional modifications with incredible craftsmanship as only Harris Performance can. They have worked their magic once again and we’re all very excited to begin this next adventure, and see how far we can push new boundaries together for the brand.”

or head to the official Royal Enfield website royalenfield.com/