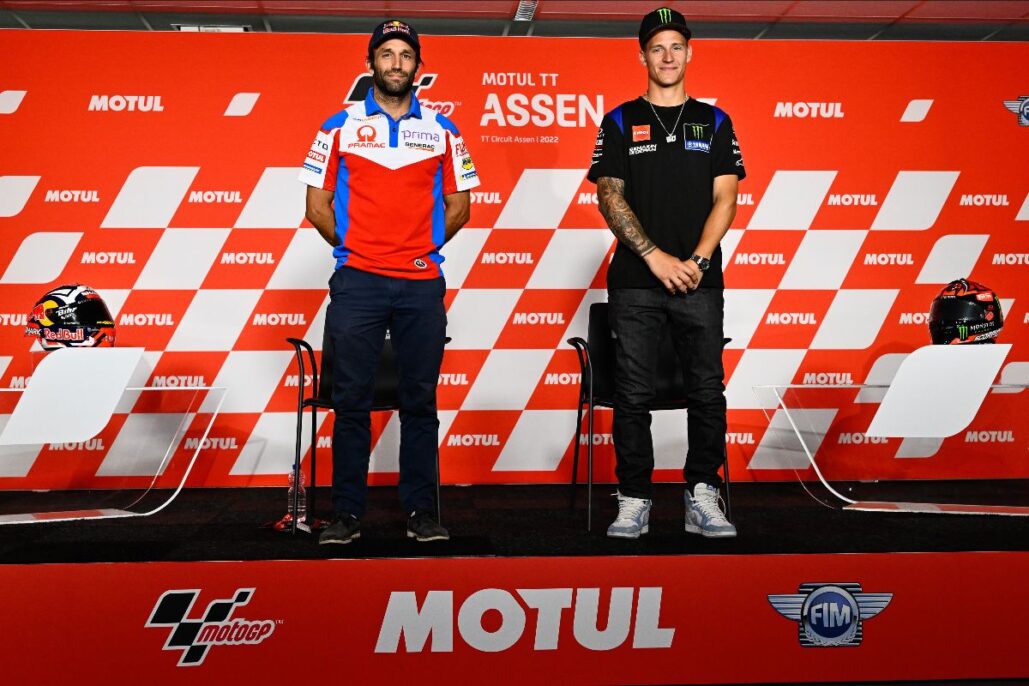 Quartararo and Zarco sit down to talk about the first half of the season and the race weekend ahead.

It’s time for the Motul TT Assen, and ahead of track action on Thursday there was plenty to talk about. The pre-event Press Conference saw reigning Champion Fabio Quartararo (Monster Energy Yamaha MotoGP™) joined by compatriot Johann Zarco (Pramac Racing) to talk about the season so far and the weekend ahead.

Here are some quotes!

What is your assessment of the first half of your season so far, and what has been the highlight?
“From my side, I will take the half season after this race, because we don’t really start the season right now. But of course, it has been a great first part of the season. Qatar, Argentina, and Austin were quite tough, I think like I’ve said, many times, I was complaining a little bit too much about my top speed and I was not focused on my riding. Then when we arrived in Europe, I could really focus on my riding and had great results. From Portugal to now, we have been on the podium almost all the time – just in Le Mans, we finished fourth – but I think that we have had a great first 10 races, exactly the same points as the same stage last year, so I think we are going in a great way.”

What have you enjoyed the most so far?
“Of course, the win in Portugal, because when you come from really tough moments and you win, I think Portugal was really one of the best. But of course, at the Sachsenring, I never really expected to win on that kind of track. Then, of course, the victories, the podiums, the Mugello race where I was struggling all weekend… They were pretty great races in Europe.”

You must be impressed by Zarco’s work so far in 2022?
“Yes, of course. Like he said, I think both of us didn’t start the season like we did in 2021 but then when we arrived in Europe, I think we both made a big step and I think we have shared a lot of podiums. Of course, if you check the last five or six races, Johann has always been on the top, fighting for the podium. So of course, he’s the most consistent for me right now of Ducati, and it will be great to have a fight like last year for the championship, like the first half in 2021. I don’t understand why he isn’t also going to the full factory.

How much are you looking forward to this weekend and hoping for a dry race on Sunday?
“I think on Monday or Tuesday, it looked like full rain on Friday, Saturday, Sunday, and today I’ve just seen that it changed for Saturday and Sunday of course, now with better weather. I think I’ve improved my riding quite a lot on the wet, but when you arrive at a kind of track like Assen, you want to have a dry track, because for me it’s one of the tracks you enjoy the most mythical tracks on the calendar, so we hope for a dry race.”

What are your impressions of Toprak Razgatlioglu as a rider?
“For me, he is an extremely talented rider. You can see his riding style, how much he pushes the bike, I’ve seen also a save he did in Estoril on the last chicane… The way he’s riding the Yamaha on the limit, I think he has the potential to jump in MotoGP. Of course, it’s a totally different story to Superbikes, I think he knows from the test at Aragon that it’s a much more rigid bike, much more different to ride. But for sure, if he’s fully motivated, and he can really be in MotoGP, I think he can be a really fast rider.”

And was today a proud moment at the new Walk of Fame?
“Yes, a proud moment, and I think Assen is a track, from my point of view, which is mythical. Every rider wants to win at Assen, like Mugello or Phillip Island. There are some tracks that are super special from my side, and to have this thing on the streets of Assen is something super special.”

How do you reflect on the first 10 races of the season?
“I’m pleased with how it’s going for me, this first half, because I didn’t start as well as I started the ’21 season with two podiums in a row in Qatar last year. But, trying to get focused really on each weekend, give the maximum energy that I can, and I try to control well this Ducati bike. The 2022 bike is sometimes a bit more difficult to fix, so then the races are becoming sometimes a bit more difficult, but the results were coming in recent races and just for this, I’m really happy.”

How impressed have you been with Quartararo’s speed and consistency?
“What is pretty impressive from Fabio, apart from just the technical side of the riding, is the ability of carrying the weight of being World Champion and having to go for the second title. You have much pressure, just by yourself you put more pressure on yourself because you know you can win so you want to win again, and then all the people are asking you, and waiting for you to take victory. Now he’s doing it, so it’s very impressive to have this maturity, controlling the championship as he’s doing. Then, I could see it really well in Catalunya and even more at Sachsenring, the pace in difficult conditions when it’s so warm on the tyres, we are all struggling with the tyres, and he has the speed that you can follow at the beginning, but then you have to slow down because you cannot keep that pace and it seems easy for him. That’s the nice thing, the time that he’s doing, that all the riders want but not all the riders can.

What are your thoughts about completing that 5-4-3-2-… run of results this weekend?
“Easier to say than do it, but why not? It would be so fantastic to follow this logic. I think the tricky weather which we can have during this weekend, for me it can help just to save some energy physically. With the rain tyres, I enjoy the bike even more because you need less strength to bring the bike into the corner, so for me the tricky conditions can be great to follow that logic, and let’s see. Also, it will be kind of a strategy, if we know it’s raining in FP2 and FP3, to push straight away in FP1 to already qualify for Q2. In the end, the weekend remains the same – go straight into Q2 to prepare well for qualifying, and then be in the first row, because every time you start in the first row, it gives you a bigger chance to get onto the podium. So, let’s see how it will be. Also, with this new fairing on the Ducati, in this place where there is the fast chicane, I think the fairing can help compared to last year. If we have this better feeling, I can be competitive.”

Does the wet Mandalika podium give you confidence if it is wet on Sunday?
“Yeah. Mandalika was a special race – big, big rain, but so warm. If we have rain this weekend, it will be quite cold, so it’s another story with the tyres and the feeling on-track. But, we had the biggest rain session in Portugal and I was feeling good. I like these conditions and the way they allow me to feel the bike well, without using the strength of the body, and that’s why I almost enjoy it more.”

Are you close to re-signing or have you agreed? How delighted are you to be continuing with Ducati after the mutual faith in 2020?
“We have a pretty good relationship, all because I’m allowed to speak straight with them, without any manager. Because, I’ve got my history and I’m almost… old enough to speak with them straight away and they know how I think, they know that the chance to stay with Ducati is the best thing for me to build up my results and get a victory. I think the factory Ducati in the Pramac team is already so good to me, so continuing with Ducati, it’s not signed, but just by talking, it’s almost 100% sure. It would be a bad surprised to [not] have any contract, but then I think they know, more or less, all the riders they will have in Ducati, just they are not 100% sure who to put next to Pecco. Joking, I was telling Ciabatti and Dall’Igna that if they have hesitation between and Italian or a Spanish one, they can take the French one right in the middle. They have kind of agreed, but there are many things to take into consideration, and knowing that I’m feeling really good with Pramac, and the relationship with Campinoti also. When a satellite team with a factory bike has as good results as we are doing, it’s so good for a satellite team also that they have their own sponsor that they can get more support from that sponsor from the side because they have a good rider. Sometimes when the good rider is going to the factory team, they have to rebuild something with another one, so on that side, it can be good to stay with Pramac. On the other side, there is the prestige of the factory team. If I win races, and can be a contender for the title, then it will be even better to be in the factory team, but you never know.”·