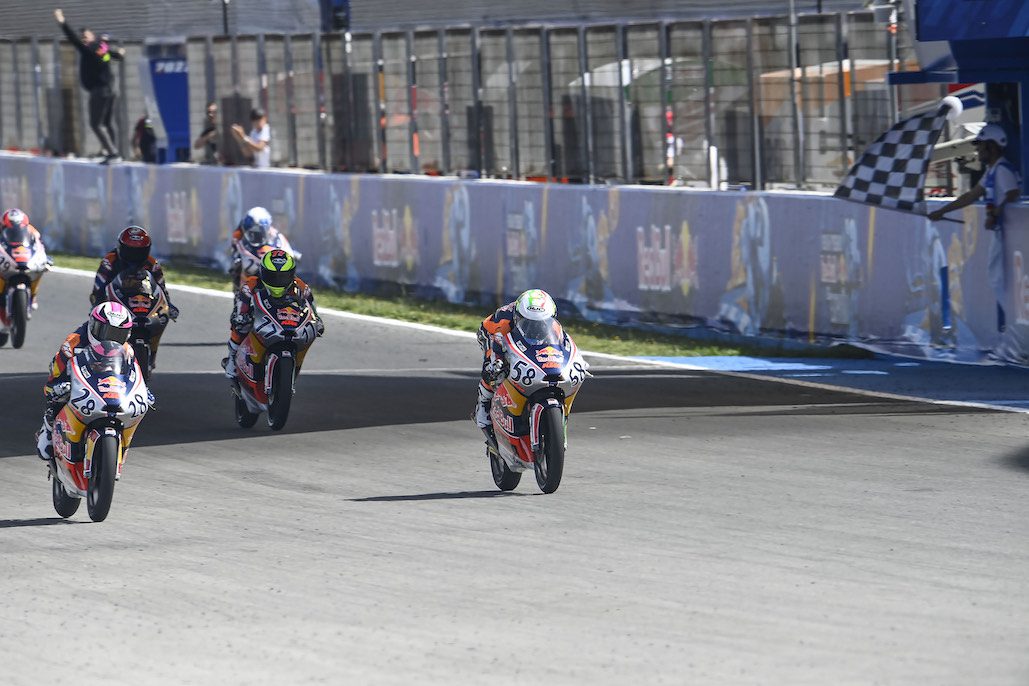 Max Quiles has no idea how he won Race 2 at Jerez, one of the truly great Red Bull MotoGP Rookies Cup battles.

The 14-year-old Spaniard jumped out of the 12 rider lead pack with a couple of laps to go, put in two sensational laps and led Luca Lunetta across the line in yet another KTM RC 250 R photo finish.

Collin Veijer was 3rd across the stripe but demoted a position giving José Rueda P3, a direct reversal of the last lap drama in Portugal that gave the 17-year-old Dutchman the win.

It was the first time in 4 races that Rueda has not crossed the line first but the 16-year-old Spaniard extended his points lead to 16 over Veijer with Casey O’Gorman a further 12 behind. There are still 10 of the 14 races to be contested.

Quiles cuts through
“I was at the back of the group because I wasn’t feeling good on the bike, the feeling of the bike and the brakes, I was feeling very bad. Then in the last two laps I don’t know what happened, I went crazy and I overtake in one lap 9 of them.

“The official lap board was wrong and when we all thought it was the last lap there was no flag and there was still one to go. I was a little bit confused but then I kept going.”

“That is why I had attacked so hard because I thought it was the last lap. I went again and could still win at the flag. We’ll see if we can get more of this,” he concluded, still on an adrenalin high.

Lunetta loved it
“Incredible emotions,” said the 15-year-old Italian who’s previous best had been 6th at the Sachsenring last year. “I so enjoyed the great race, the bike was great. Of course it was sliding around a bit towards the end but I could manage it. I had a great battle to the line with Max, almost first but this is also fantastic.”

“I can’t wait to ride again at home in Mugello, this has given me the confidence I need to go well there and I want to thank everyone for that.”

Rueda right there
Again Rueda did a lot of the leading and continued his faultless podium run. “It was such a hard race, battling all the way. Again there was no chance to break away.”

“The bike was great, I was thinking about it but finally I didn’t change anything after yesterday. But the track was hotter, the bike moved about more, it was the same for everyone. I am happy to be on the podium again, happy with the points and enjoyed the race so much.”

Veijer up front again
“It was a hard race, I struggled a bit to get to the front. Finally we did and I tried to stay there in the top positions. The grip did go away a bit at the end, on the last lap I went into turn 4 and nearly high sided it and went a little bit wide and went over track limits.”

“At the last corner I tried to overtake Lunette and Maximo, but it was difficult, I went over the line P3, I’m happy with this but dropped to 4th with the track limits. Not the best thing but that’s it.”

O’Gorman’s head exhausted
“That was probably one of the most exciting races I’ve ever been in,” enthused the 14-year-old Irishman who finished 5th. “Every corner I was either overtaking or being overtaken. We were 5 wide into turn 6, I’ve got tyre rubber all up my leathers, I made contact with people about 5 times in that race.”

“In the second to last corner in the last lap, my helmet touched Rueda’s exhaust, it was so close.”

“Yesterday’s race I struggled so much out of corners, for today we went shorter on the gear so that I could get out better and it was very good.”

Angel Piqueras 6th
Once again the 15-year-old Spaniard ran at the front with Rueda but couldn’t hold that in the closing laps. “Yes, it was very hard, I did everything I could, I will be in much better shape for Mugello.”

The Portimão pole man admitted that the 2 broken toes he sustained there in Race 1 took the edge off his performance this weekend.