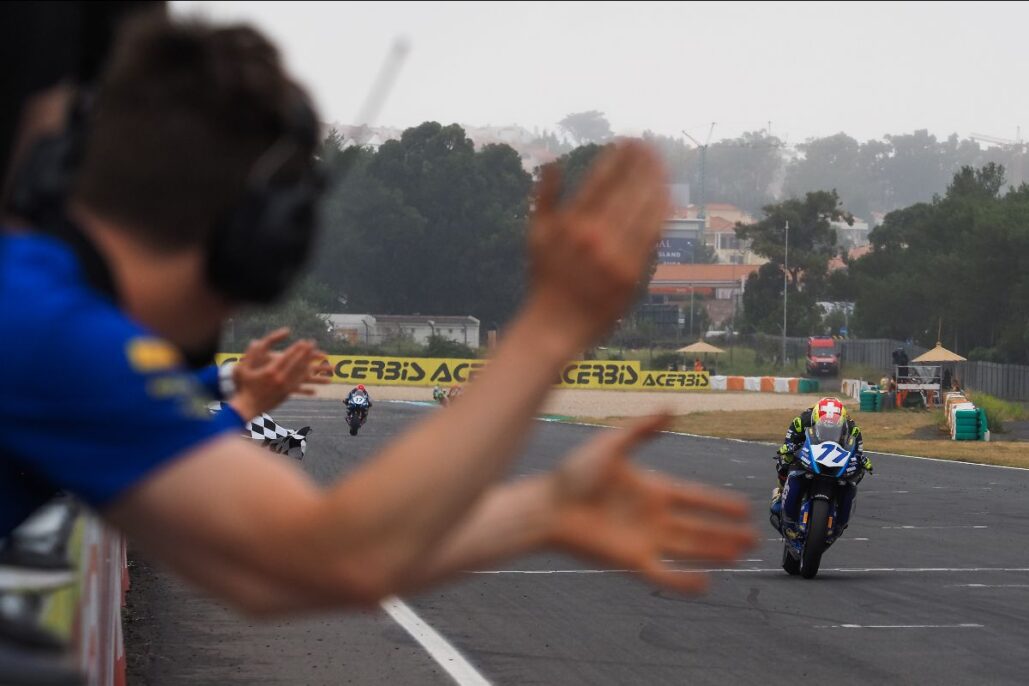 The reigning WorldSSP Champion matched his five win streak from 2021.

P1 – Dominique Aegerter (Ten Kate Racing Yamaha)
Despite wet conditions, the reigning WorldSSP Champion clinched his fifth consecutive victory in Race 2, meaning he has equalled his best winning streak from 2021.
Struggling in the early stages of the race, he made his leading overtake over Baldassarri with six laps to go.
It’s Aegerter’s 15th win in the category and his ninth hat-trick having claimed both wins from pole position and scoring the fastest lap.
Aegerter increased is Championship lead to 44 points over Baldassarri.
“Fantastic weekend again. We’re taking the win for the fifth time in a row. We are leading the Championship with some points of advantage. The race was more quite difficult because when we get to the start there were some drops of rain so when we started, all the 18 laps were sizzling some rain. I didn’t know how much to push so I was following some riders. But then we were a big group overtaking each other and then with 3 or 4 laps to go I decided to risk a bit more. I wanted to be in front in case we had a red flag … so I tried to push a little be more and did some fast lap to get a small gap and take the win.”

P2 – Kyle Smith (VFT Racing)
Starting from 17th on the grid, Smith claimed his first podium in WorldSSP since Magny-Cours 2020, his best result of the season so far.
His last two podiums were also claimed in wet conditions.
“A difficult race because I started from the back of the grid. First season with the team and we’re just trying to find the correct bike set up in dry conditions. At the beginning of the race, I just putted my head down trying to not make any mistakes. And then it started again in mixed conditions. I managed to put my head down and passed a lot of people. Really good fun race but difficult at the same time. I’m happy for the team to get on the podium.”

P3 – Lorenzo Baldassarri (Evan Bros.WorldSSP Yamaha Team)
Baldassarri claimed his fifth WorldSSP podium with third position in Race 2.
It was his first rain-impacted WorldSSP race.
The Italian rookie stands in second place in the Championship standings, having conceded 9 additional points to the Swiss rider.
“Today was a tough race. There were many riders fighting for the win. Seeing the flags with wet conditions, I didn’t know how much it was raining so making the pace was not easy. I managed well and I think we can be happy about this weekend. It was not easy to take the podium is those conditions. I can’t wait for the next race in Misano, hoping to put Domi behind me!”

In fourth place is Italian rookie Yari Montella (Kawasaki Puccetti Racing) as he claimed his career-best WorldSSP result. He finished a second clear of teammate Can Oncu. The Turkish rider was one of several riders who led the race at one point but dropped back in the latter stages.
Finishing just 0.047s behind him was Oli Bayliss (BARNI Spark Racing Team) as the Australian rookie scored his best result so far in WorldSSP with sixth. 2021 WorldSSP300 Champion Adrian Huertas (MTM Kawasaki) also claimed his best result in the category with a seventh position.

After he looked to fight for victory, Federico Caricasulo (Althea Racing) had a technical issue on Lap 6 which meant he did not finish the race, while Jules Cluzel (GMT94 Yamaha) was a another non-finisher after bringing his bike back to the pits in the early stages of the race.

Following a crash in Sunday’s Warm Up session, Finnish rider Niki Tuuli (MV Agusta Reparto Corse) was declared unfit with an open fracture to his fourth toe and fractures to his second and third toes on his left foot.