If racing and premium performance improves the breed then the 2023 KTM 450 SMR is one of the company’s finest expression of pure motorcycling excellence. Even the quickest of glimpses at the latest version of this Supermoto ‘weapon’ shows a bike purposely chiseled to annihilate the asphalt.

In a discipline where tenths of a second and tens of centimetres make the difference in a lap-time or an overtaking move, then the precision and the sheer razor-edged intent behind the 2023 KTM 450 SMR is exactly what any Supermoto fan or racer needs.

The innovations start with the refined hydro-formed, laser-cut and robot-welded frame. Front-end focus and sensitivity and rear-end stability defines everything that is fast and strong on the Supermoto circuit. KTM has altered longitudinal and torsional flex (also through frame wall thickness) to make sure that feedback is acute and on-point as any rider – from novice to world championship-level racer – will demand. A revised shock mount enhances energy absorption and straight-line stability for 2023. The ‘anti squat’ concept translates to better acceleration and corner exit and is also achieved courtesy of the repositioning of rotational masses and the new shock itself. The ‘inward’ located footrests augment the feeling that the 2023 KTM 450 SMR can be gripped, carried and pushed however far the rider wants to go. The polyamide reinforced aluminum 2-piece subframe is another ingredient for the overall improved handling effect – with the bonus of superb strength. The flow of contact with the track surface comes spilling through the high-grade aluminum CNC-machined triple clamps, which are newly applied with increased grip surface for less handlebar ‘twist’.

Sliding into turns has never felt easier but the added reassurance comes from expert degree of flex pouring forth from the diecast aluminum swingarm, new 22mm rear axle and the latest generation of WP XACT Suspension. AER 48mm forks have a split-damping function and simple tool-less adjusters among other advantages. The same practicality graces from the new shorter, lighter (but still with the same amount of travel) WP XACT rear shock, which is fully optimized with several significant upgrades to enable advanced damping characteristics. The WP XACT shock is the most progressive and capable system seen on a KTM Supermoto machine yet.

Calculated millimetres on corner entry are made possible with high-powered 4-piston Brembo brakes with a 310mm front disc. A 220mm disc and single piston caliper will bring the rear end around nicely while it’s feted by the SUTER anti-hopping clutch and Brembo hydraulics that will let riders drift all the way ‘til they shift.

Once the Metzeler Racetec SM K1 tyres (with a large usage window and rapid warm-up times) have been abused into the apex, the unmistakable firepower of the 2023 KTM 450 SMR gets everything firing forward. The new SOHC engine is designed with mass centralisation as the goal and blasts out 63 hp – with the motor weighing just under 27 kg, almost half a kilo less than the previous edition. The engine itself has been tilted back and the sprocket dropped by 3mm with new cylinder internals and crankshaft optimisation as other markers of the 2023 set-up. PANKL Racing Systems have supplied a redesigned five-speed gearbox with a new transmission ratio. Another feature is the fresh Quickshift sensor on the shift drum for clutchless upshifts (which can also be disabled through the handlebar switch). The Keihin Engine Management System administers the traction control, launch control and quickshift actions and the ability to flick between two customisable engine maps.

Throwing the whole package into place on-track is now simpler with new ergonomics and the sculpted rider ‘triangle’ that permits even better contact points between motorcycle and user. A recessed grip ‘pocket’ under the seat is another example of the fine-tuned practicality. There won’t be better or harder-looking bike on the track than the 2023 KTM 450 SMR. The 1990s-derived splash of purple adds to the READY TO RACE graphic vibe together with the flat orange seat and white tail. 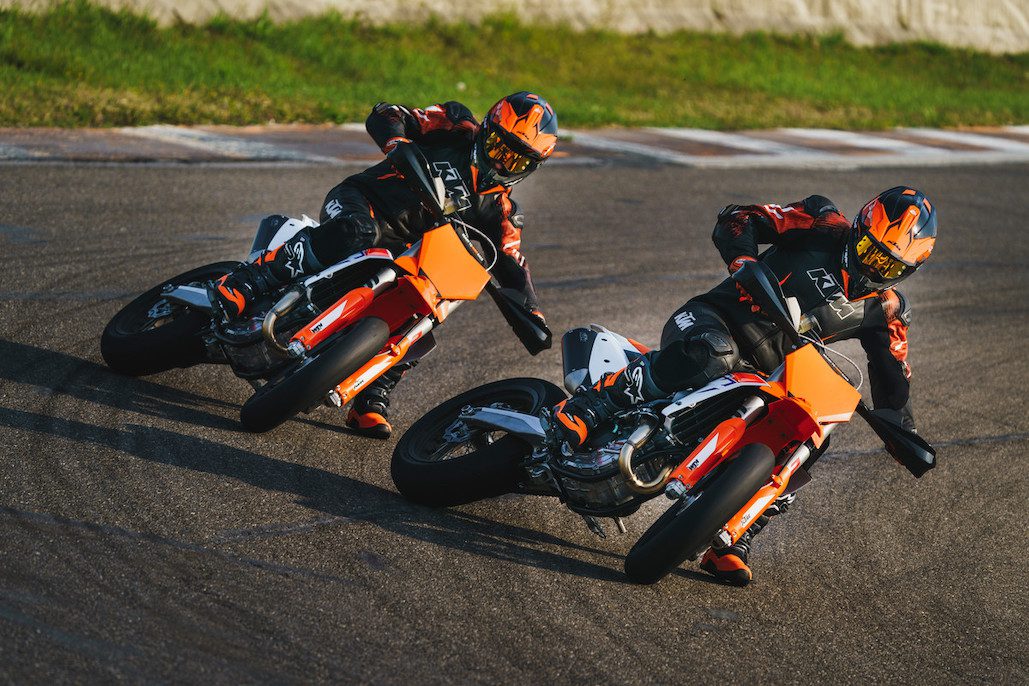 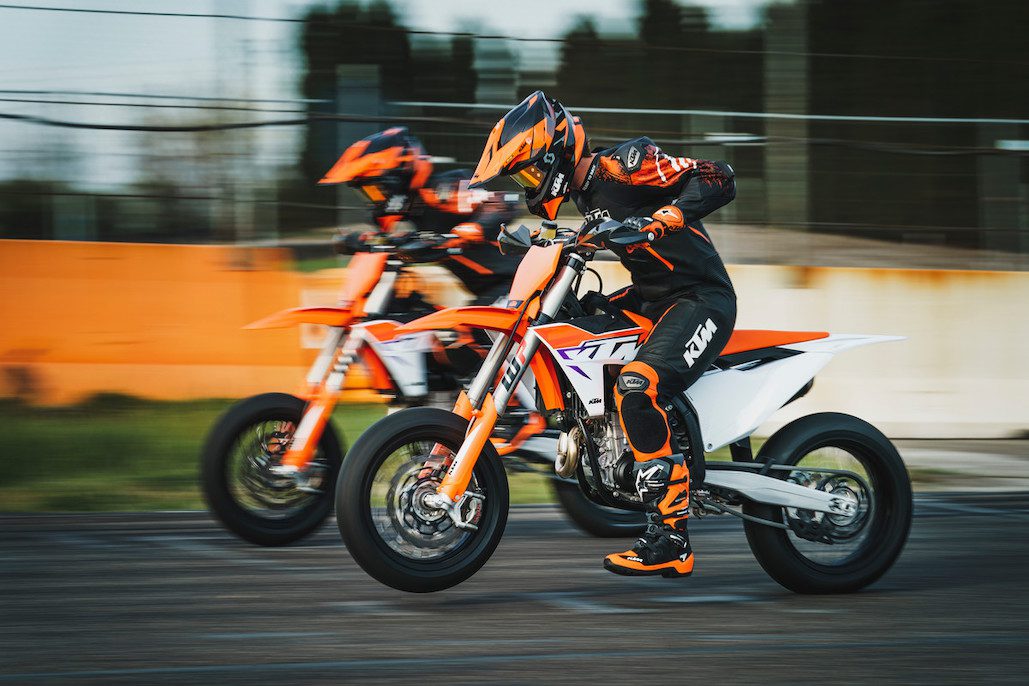