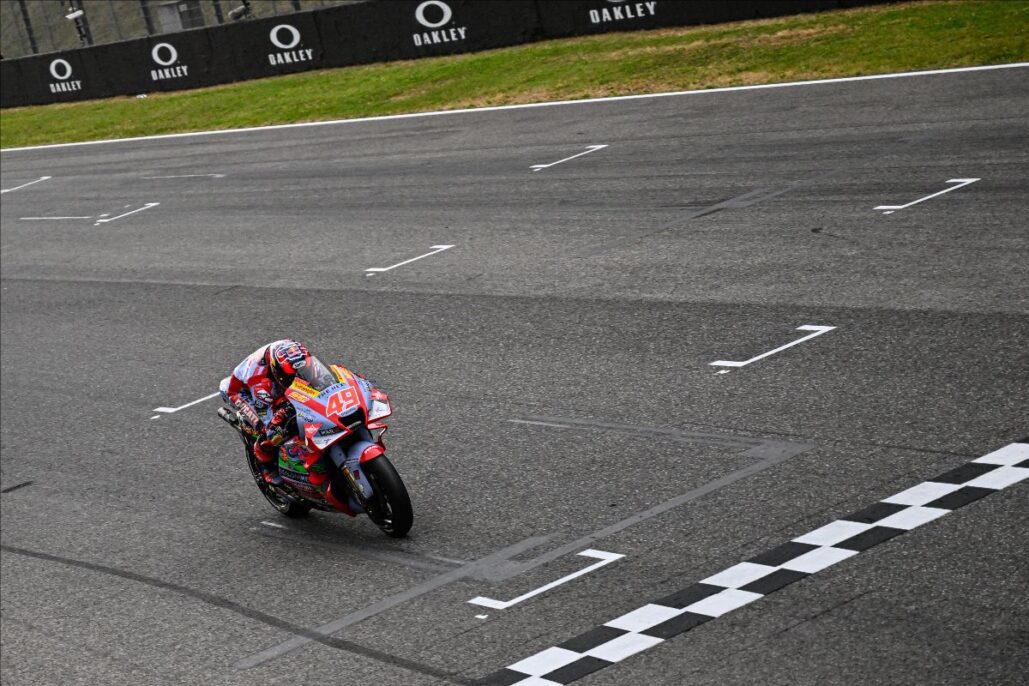 The two rookies front a Ducati top five lock out, with Quartararo leading the resistance in sixth.

How’s that for a Saturday shake up? Gresini Racing MotoGP™ rider Fabio Di Giannantonio has the first premier class pole position of his career after a dream Q2 session for the rookie home heroes in the Gran Premio d’Italia Oakley. Di Giannantonio set a 1:46.156 with the chequered flag out to head up a front row comprised of three Italians from two Italian teams, riding Ducati’s Bologna bullets. Fellow rookie Marco Bezzecchi was second-fastest and his fellow Mooney VR46 Racing Team rider, Luca Marini, took third after rain came, faded and then left plenty up for grabs on full slicks in Q2.

Q2
Di Giannantonio came through Q1, when the arrival of light rain spiced up proceedings, but it was clear by the end of that session that slick Michelin tyres had to be the choice for Q2 despite the persistent threat of rain. That meant the battle for pole would be less about strategy and more about a straight fight to set the quickest pace in the hills of Tuscany…

After a red flag interruption for a Marc Marquez (Repsol Honda Team) crash, rider ok, Di Giannantonio then kicked things off with a 1:49.124 before moving the marker to a 1:47.163 and then a 1:46.607 on his following laps. The Gresini rider continued to prove the pacesetter until Prima Pramac’s Johann Zarco put in a 1:46.875, but that time would not stack up as the pace continued to hot up.

Bezzecchi got in a 1:46.616, then Francesco Bagnaia (Ducati Lenovo Team) a 1:46.471 and Di Giannantonio a 1:46.410 just before the chequered flag, but Zarco wasn’t done yet. The Frenchman clocked a 1:46.383 to go to provisional pole, before it looked like being a VR46 one-two when Bezzecchi set a 1:46.244 and team-mate Luca Marini moved his time to a 1:46.327. The dream scenario did not quite come to pass for the VR46 squad though as Di Giannantonio subsequently found even more time to take it back.

Zarco qualified fourth, one spot ahead of Bagnaia, which means the best of the non-Bologna rest was Monster Energy Yamaha MotoGP™’s Fabio Quartararo, the World Championship leader taking sixth to lead the resistance.

The Grid
Behind the five Ducatis and a Yamaha, Aprilia Racing’s Aleix Espargaro claimed seventh, although he looked far from pleased.

Joining him on Row 3 will be Takaaki Nakagami (LCR Honda Idemitsu) and Pol Espargaro (Repsol Honda Team), while Enea Bastianini (Gresini Racing MotoGP™) rounds out the top 10 on another Ducati. Jorge Martin (Prima Pramac Racing) qualified 11th-fastest but is set to start 14th as a result of a grid penalty for being slow on the line and disturbing another rider in FP3.

Early, Q2 was red flagged barely more than a minute in as a result of a big crash for Marc Marquez at Turn 2, rider ok but RC213V decidedly not. The machine caught fire and fluid spilt onto the track, necessitating a stoppage so the surface could be cleaned up.

He would later get back out on his second bike and set a personal-best lap time of 1:47.468, but will start 11th due to Martin’s penalty. Ducati Lenovo Team’s Jack Miller similarly moves up to 12th on the grid, the Aussie missing out on advancing from Q1.

That’s quite a grid for the Gran Premio d’Italia Oakley, and a MotoGP™ race that promises much. Join us at 14:00 (GMT +2) for another showdown in the stunning hills of Tuscany, with lots of the line on race day.

Fabio Di Giannantonio: “Well, if I could wish for a perfect Saturday, I think it’s this. What a feeling, that’s amazing; my first MotoGP™ pole, here in Mugello with a Ducati, with all the tifosi – unbelievable. It’s unbelievable also because I thought I could be really fast in the dry, and then the conditions became tricky, so I said, ‘Now it’s difficult, it’s tricky, so let’s see.’ But I was just fully committed, fully head down, fully focused, and we did an incredible lap. It’s something unbelievable here, so super, super happy.”