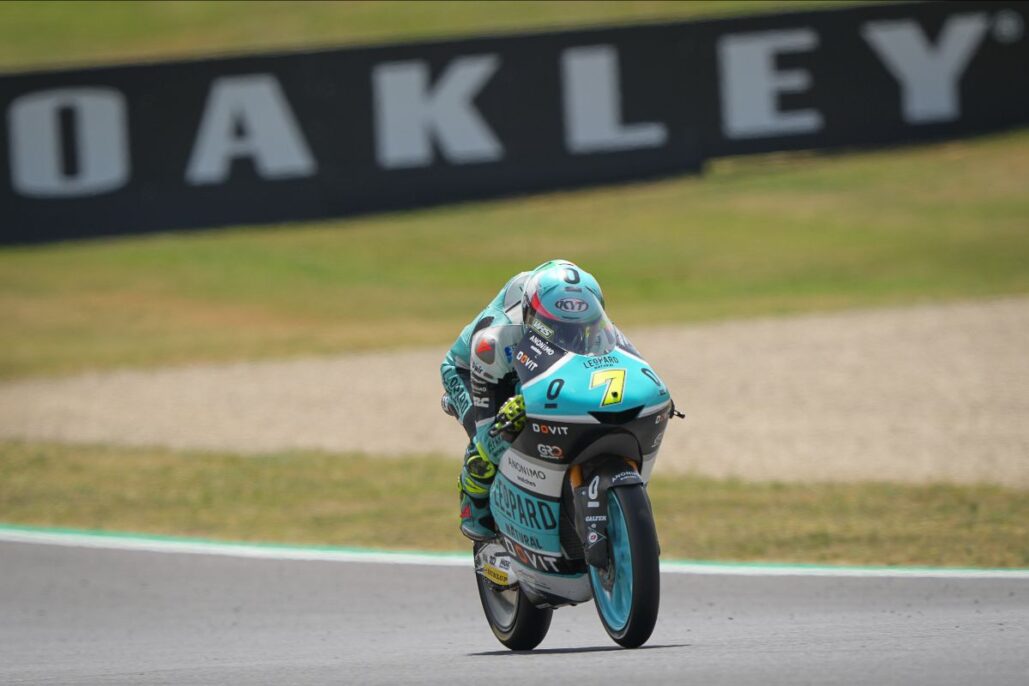 The home hero heads Masia and McPhee at Mugello.

Day 1 at the Gran Premio d’Italia Oakley was Dennis Foggia (Leopard Racing) vs Jaume Masia (Red Bull KTM Ajo), with the former setting the benchmark in FP1, a time that wasn’t beaten, and Masia taking FP2 to end the day second overall. Third went to another FP1 lap from John McPhee (Sterilgarda Max Racing Team), the Brit completing the top three on Friday.

FP1
Foggia made his statement lap in FP1, quick throughout the session when running on his own and with a best lap of 1:56.916 near the end to top the session.

The Italian was over three and a half tenths quicker than either of the Sterilgarda Husqvarna Max team-mates, John McPhee and Ayumu Sasaki, who took second and third, respectively. Their best laps came in the slipstream and with both tucked into the same group, with McPhee setting a 1:57.283 and Sasaki a 1:57.394. Diogo Moreira (MT Helmets – MSI) finished fourth on a 1:57.850, another impressive showing from the rookie.

FP2
Considering he and Foggia are tied for second in the World Championship, it was fittingly Masia who set the pace in FP2, clocking a 1:57.134 right at the end of the session which would earn him second-fastest on the combined times. It also put him a whopping six tenths clear of Sasaki and Tatsuki Suzuki (Leopard Racing), who made an improvement to a 1:57.775.

That was the theme of the second practice session, with only Matteo Bertelle (QJMotor Avintia Racing Team) causing a change to the combined top 14 until the time attacks in the closing minutes.

Toba crashed again, and there was a big crash for Sasaki. The number 71 highsided riding in a group with Masia and Elia Bartolini (QJMotor Avintia Racing Team), with contact made by those following. Taken to hospital in Borgo San Lorenzo, Sasaki was subsequently diagnosed with left and right collarbone fractures and concussion, so he’ll under observation for at least another 12 hours and not take any further part in the race weekend.

Provisional Q2 places
Behind Foggia from FP1, Masia from FP2, McPhee, Sasaki; now out, and Suzuki, Moreira is also into Q2, as it stands, in sixth. World Championship leader Sergio Garcia (Valresa GASGAS Aspar Team) took seventh with a 1:57.921 at the end of the afternoon, and rounding out the combined top 10 are Bertelle on a 1:58.004, from Riccardo Rossi (SIC58 Squadra Corse) and Andrea Migno (Rivacold Snipers Team). Izan Guevara (Valresa GASGAS Aspar Team), who is fourth in the World Championship, will be looking to strengthen his grip on a spot in Q2 tomorrow in FP3 considering he is currently 12th, just ahead of Mario Aji (Honda Team Asia) and Daniel Holgado (Red Bull KTM Ajo).